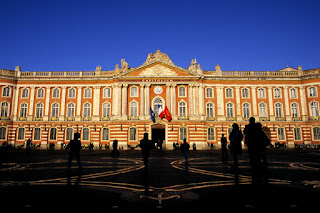 I had to pick MG up from Toulouse station on Monday night, as his train did not get in until 7.45pm, I thought I would spend a few hours shopping.

Toulouse is the fastest growing city in France mainly due to the fact that it is the home base of the European aerospace industry, the A380 Airbus is built here, it is also a major university town, the university of Toulouse is the oldest in Europe.

Now as I live in the middle of nowhere a day out in the city is a very exciting prospect, Toulouse is an hour and quarter's drive from us, so I don't go very often, I prefer to go to Pau which is nearer and a town I love.

I love the buzz of cities at Christmas, especially Paris and London, twinkling lights, loads of people milling about, lovely merchandising, stopping off in a café or pub with loads of goodies in shopping bags.

So what happened to Toulouse?  It's got all the right ingredients, it's a beautiful city, with fabulous shops, but something was missing, yes, it had the Christmas market in the main square and twinkling lights, but the buzz just seemed to be missing, was it because it was a Monday?  Monday is a quiet day in France, a lot of the shops are closed, in many respects Monday feels like a Sunday, was it me? Maybe I just wasn't in the mood.  I can't put my finger on exactly what was missing, but something was.

I plan to go to Pau next week, so I hope I can get my fix of Christmas buzz.
Posted by Dash at 8:12 PM