God it's been hot, I know from many other bloggers  from New York to London and here in France, the Western Hemisphere is positively sizzling!

Once again I have been neglecting my blog, frankly I have had loads to do, not helped by the lethargy making heat and the fact that my computer is located in the hottest part of the house I cannot post when my brain is overheating.

MG went off to the 'Le Mans Classic' on Thursday with the boys! Reports via the girlfriends and wives network have filtered through of some very laddish behaviour involving drunkenness, (hardly surprising if the vast amount of whisky consumption rumours are true) irresponsibility and nudity!  Boys will be boys!


One of the boys went by bike, Crusoe decided to try it out for size 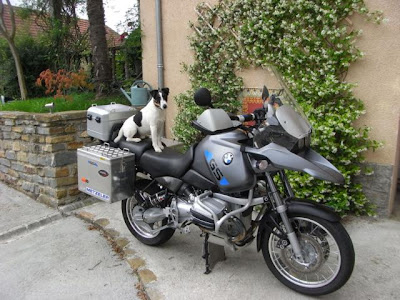 "Ooh I can smell chorizo, it appears to be coming from this chrome box"! 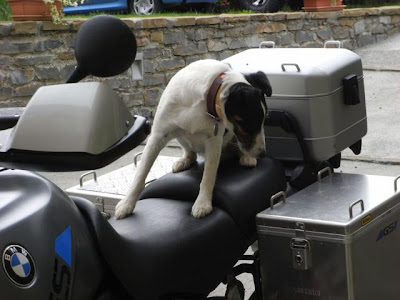 Meanwhile I have been left to do all the work another lot of guests arrived on Saturday, so guess what, I have been mowing, gardening, cleaning, ironing and making up beds severely hampered by the extreme humid heat.  When I haven't been doing that I have been taking cold showers and been prostrate on the sofa with a large fan directed at my glowing body! (horses sweat, men perspire and ladies glow).

These are some of the tools of my trade, located just outside our potting shed 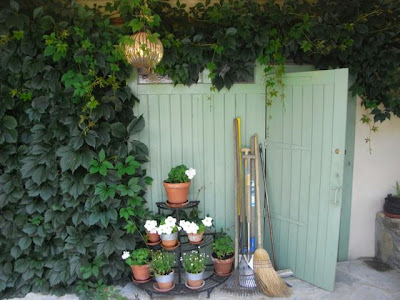 The pay off, Campsis providing much needed shade over the Gazebo 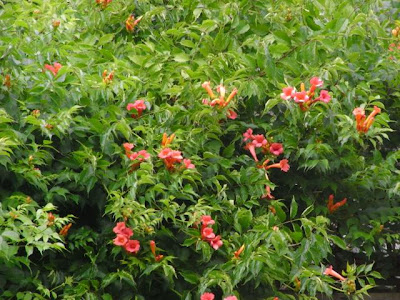 I have decided I need a Femme de Menage (housekeeper) to help me, preferably a nice cheery lady from the village, I am not very good at delegating as I am a bit of a perfectionist but boy I could use some help, sometimes running a large five bedroomed property, with a big garden overwhelms me, the work is never finished it just goes on and on.
This is not me, it is my ideal Femme de Menage! 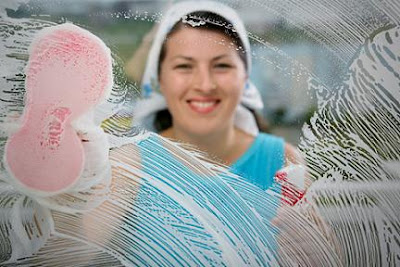 I have been dreaming of holidays, I spend so much time ensuring everything is perfect for our guests that I don't switch off, one of the joys of holidays is you don't have to worry about 'sorting that cupboard out' or organising an impromptu dinner party for eight.
MG recently muted Corsica as a possible destination, sometime later in the Summer, I was delighted, we went there about nine years ago....
Calanche de Piana Corsica 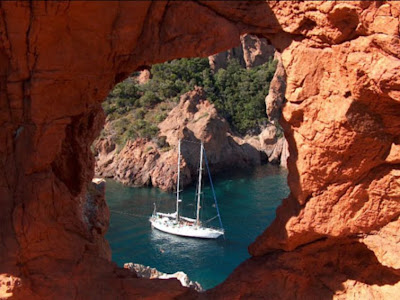 When we were living in Paris we took a month out to do a big road trip round France, mainly this was a much needed break for MG who had been working solidly for four years in Paris and needed a break also it was an excuse for him to test his new sports car.
'The Moors Head' Corsican National Emblem
'The Corsicans want to see well, liberty shall follow the torch of philosophy and we shall not be scared by the light' 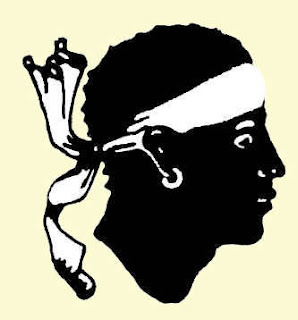 MG had said he always wanted to go to Corsica as he had heard it was beautiful, we were visiting Belle Mere who lives in Provence, we decided to go to Corsica for a couple of days, we could get the overnight ferry from Toulon To Bastia, Belle Mere was very dubious, she does not really like the Corsican's, they have quite a reputation, bandits, bombs etc. They are fiercely independent islanders trying to hold on to their culture, they are now governed by France, in order to pacify them, the French government give them tax concessions (I think this is why they have a bad reputation with French mainlanders).
Calanche de Piana Corsica 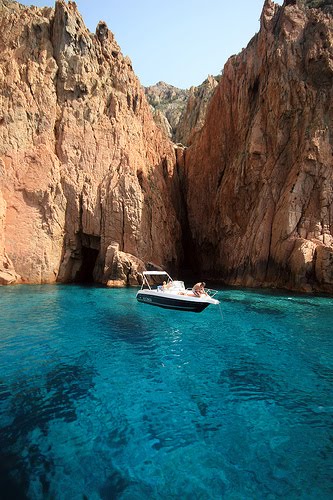 Well wow, I am quite well travelled, without doubt this is the most beautiful place I have ever visited, a couple of days turned into ten, we drove round the entire island the scenery changes every twenty miles or so, some parts are purely Mediterranean, other parts reminded me of Scotland, Cornwall, The Alps, God if I was a location manager in the film industry, I would just shoot in Corsica, it has everything.
These three images are all of Bonifacio, situated on Corsica's southern tip, on a clear day you can see the Northern coastline of Sardinia, Corsica's neighbouring Italian governed rival. 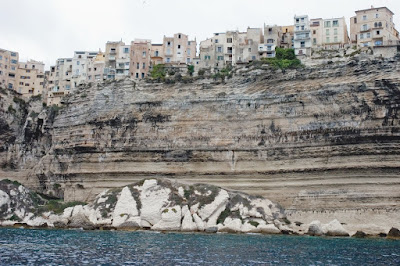 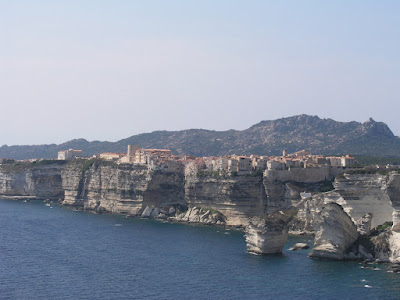 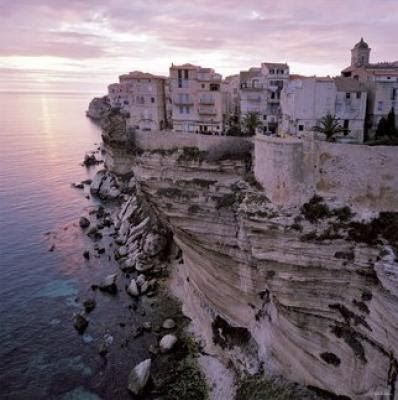 The road trip we took round Corsica was amazing, we went in June we had not pre booked anywhere, so we were relying on our 'Chambre d'hotes Corsica guide' just tipping up somewhere, they always had a room to spare, on one occasion MG left me in the car whilst he went into a small hotel, after half an hour of waiting I went in to see what had happened to him, the owner was plying him with his home made wine, they were a Corsican couple, warm and lovely, of course they had a room! after an evening of heavy drinking and a lot of singing, (Corsican's like singing!) we were directed to a very cosy, rustic room, we had one hell of hangover the next day, but it is an experience I will never forget and totally dispels the myth that Corsican's are hostile and unfriendly, I think at this point I might add that Napoleon was Corsican and that Corsicans experience great longevity they put this down to lot's of drinking, good women, good men, good food and smoking, most Corsicans and Sardinians live well into their hundreds.
Next three pictures show three of the hundreds of beaches, in Corsica, some hidden gems, coves with nobody on them just waiting for you and that necessary dip in the cooling sea 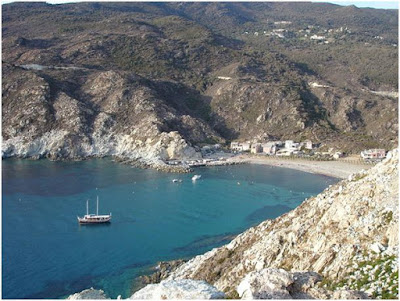 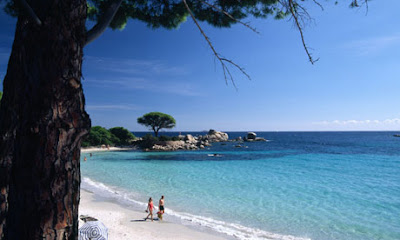 And others, like this beach in Calvi, still wonderful, not overrun but offering sun loungers, parasols and waiter service, 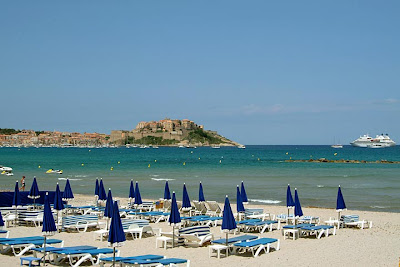 One of my favourite places in Corsica was Calvi, situated on the North West of the Island, I remember watching these amazing super yachts coming in, they were too big to get into the port, we were watching this whilst having dinner at one of the many alfresco restaurants in Calvi, we asked the waiter about these yachts, he told us "Oh that is Valentino and his friends, many fashion designers come every year, they prefer it here to St Tropez or Monaco, they have privacy here and take inspiration from the beauty of the island".
Valentinos Yatch, TM, 'The Blue One', not sure where this photo is shot, but it's not Corsica 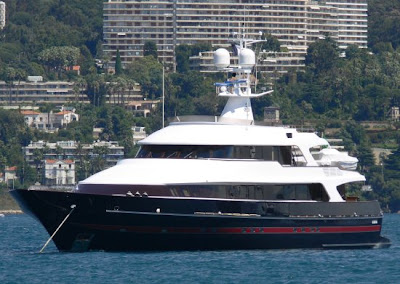 Of course the next day MG hired a jet ski we explored the beautiful coastline, and took a dip in the azure sea, but we could not resist getting up close and personal to Valentino's yatch, we did not see him but we did see his crew and his pugs, we waved his crew waved back and that was it, sadly no invitation for early evening cocktails!
We also explored the Fango valley, just south of Calvi we discovered an old derelict olive farm, with great potential, we were planning what we could with it if we could purchase it, just one of those holiday dreams!
Fango Valley, Corsica 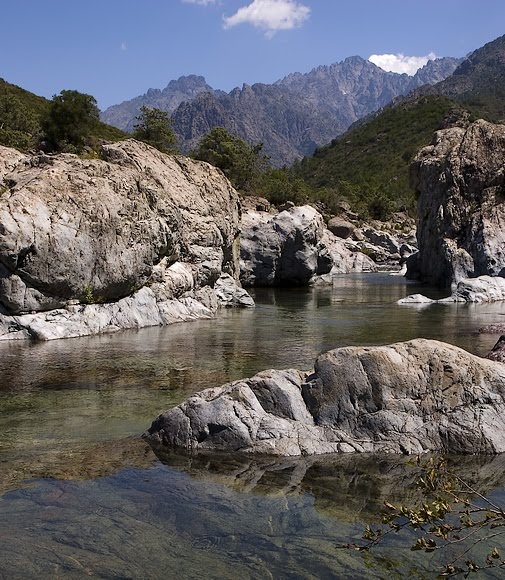 Other highlights of the holiday was MG's racing driver abilities, some of the roads in central Corsica are very treacherous on one occasion we were negotiating a narrow mountain pass when a coach appeared, the coach was not budging so MG had to reverse, I closed my eye's tight, if I had have opened them, all I would have seen was a sheer, rocky drop into the Mediterranean, phew we made it, another reason why MG loves Corsica so much is the fact they have a major rally circuit, on another occasion he was challenged to an impromptu rally drive through a forest, yes with me as passenger, clinging on for dear life, the other driver had the advantage of knowing the terrain, even though I was petrified MG did a Stirling job, thank God he is an excellent driver with great reflexes.
Early evening in Calvi 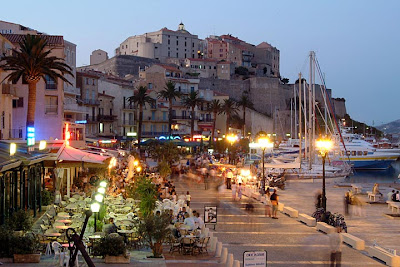 Infinity pool somewhere in Corsica, that will do nicely 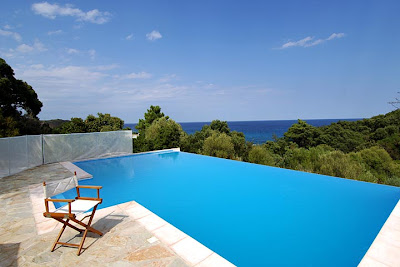 Oh I hope we go back, as you can see from my enthusiasm I love it, MG wants to do car things, but he could just drop me off at a beach or in Calvi and we could meet up later for cocktails.
I also have to add that McDonald's is banned in Corsica and buildings cannot exceed four stories, now that has to be a good thing...
Posted by Dash at 11:38 PM