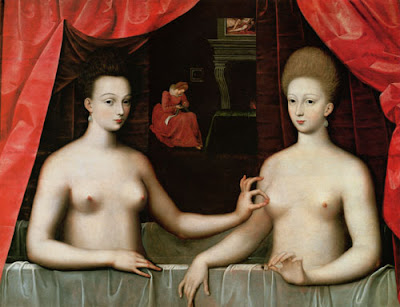 Gabrielle d'Estrees and one of her sisters, School of Fontainebleau C 1594
A few years ago MG took me for a romantic weekend in the Loire, we stayed at the lovely Chateau de la Bourdaisière,  it was perfect, lovely gardens, beautiful rooms and very romantic, the perfect base for exploring the Loire and visiting it's beautiful chateaux. 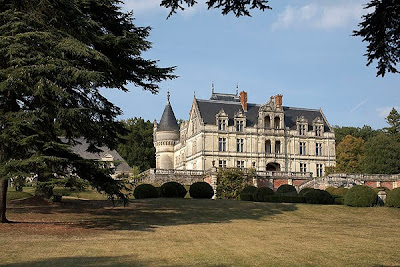 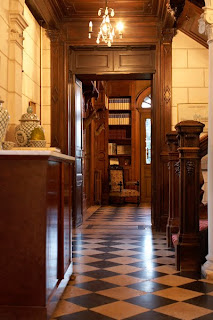 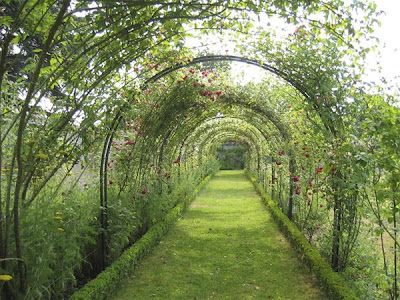 Photos via Chateau de la Bourdaisière website
Whilst staying at the Chateau I noticed a copy of the rather cheeky painting above and became intrigued.  The painting is thought to be of Gabrielle d'Estrees and her sister the Duchess de Villars Brancas.

On further investigation I found out it is believed, Gabrielle was born at the Chateau.  Gabrielle was born into an illustrious family known for producing a long line of fascinating and beautiful ladies, who charmed the Kings of France.  Gabrielle herself became the mistress of King Henry IV of France, he was very much in love with her, she bore him three children whom were all legitimized and he showered her with titles, she had a lot of influence over the King and he was often accused of compromising his victories in order to visit her.  Henry publicly acknowledged Gabrielle as his mistress and he seriously considered marrying her as he already considered her as his wife.  Gabrielle looked upon herself as Queen of France (even though Henry was married to Queen Margaret) sadly she died soon after giving birth to a stillborn son,  before any steps towards marriage could be taken.  Henry was grief-stricken and gave her the funeral of a Queen. 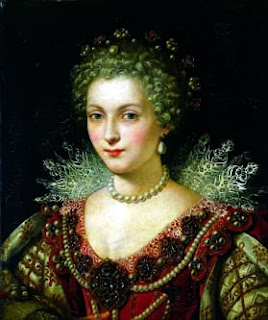 Gabrielle d'Estrees
Whist we were visiting some of the great Chateaux, I noticed that Gabrielle had a bedroom in almost every one, and my imagination started to work overtime, I could almost see Gabrielle drawing up to to the Chateaux, in a cavalcade  of carriages, organising her vast entourage, resplendent in beautiful gowns and jewels.

I have just discovered there is a book about her, available here I will definitely be ordering it on my next Amazon splurge.
Posted by Dash at 3:57 PM