Lady Fortescue, A Woman Ahead Of Her Time 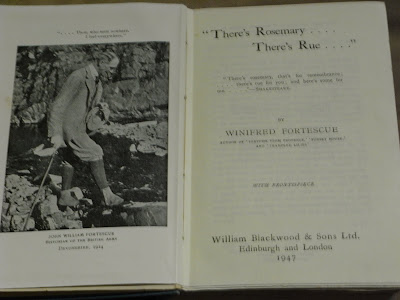 Every so often I get hold of a book that captivates me and takes me over, this recently occurred with "There's Rosemary There's Rue".

It's the autobiography of Winifred Fortescue (nee Beech), first published in 1939.  Born in 1888 the third child of a country rector, she went on to become an actress, interior decorator and fashion designer under the name of CINTRA, writer, and just after the second world war, a philanthropist.  All this in the early part of the twentieth century, she was an amazing woman and way ahead of her time.

In 1914 she married John Fortescue the Kings librarian and archivist, he was 28 years her senior but despite the age difference it was a very happy marriage and he supported her in all her ventures.

She wrote seven books in total and the first one of these was "Perfume from Provence" (published in 1935) about her experiences of moving, renovating a house and living in Provence, she was probably the first writer of this genre.

Sadly most of her books are currently out of print, but still available via Amazon through specialist booksellers.

I cannot resist including this rondeau which John Fortescue wrote for CINTRA'S Invitations for her Autumn season fashion show, held in her garden, in Hampstead on a midsummers night.


"In Cintra's garden sweet the roses blow,
And rest is there and peace; while far below,
Like droning of five million human flies,
The hum of distant London swells and dies
And dies and swells, in ceaseless ebb and flow-
The hum of men who hurry to and fro
And seek and seek-for what they hardly know,
But there is calm 'neath silent summer skies
In Cintra's garden.

"There lanterns dim, 'mid music soft and low,
Shall guide the living flowers as they go
Arrayed in Cintra's lovliest draperies,
Till dazzling light reveal them to your eyes.
Come, gentles, see what one fair night can show
In Cintra's garden"