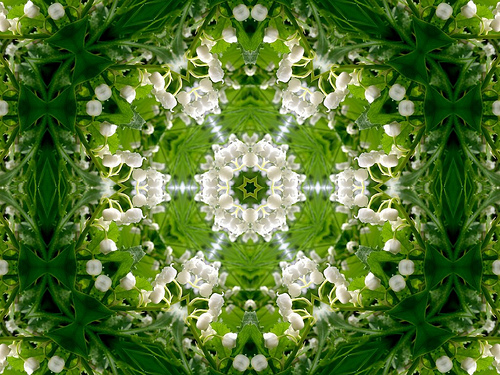 It's the first of May, the day when all young maidens need to get up at dawn and wash their faces in the early morning dew to ensure everlasting beauty!
The first of May is a significant day all over the world for various reasons but here in France May Day and Lily of the valley or Le Muguet as they are known in France are inextricably linked.
I first came across Le Muguet with Belle Mere she had come to stay and help me out in the garden soon after we first bought the house, (Belle Mere is a gardener par excellence, previous to living in this house my gardening experience was nil, I have learnt a lot since then and much of this is down to Belle Mere) we were digging away on a patch of land trying to get rid of all the weeds, I started yanking something out of the Earth, Belle Mere, saw me and shouted "No, no, not those, they are very precious and bring good luck, take them out carefully and I will replant them somewhere for you" she then proceeded to tell me all about them...
On the run up to the first of May you will see Le Muguet practically everywhere in France; at the supermarket, on sale in the local markets in the fashion magazines and in shop window displays, the first of May is a national holiday in France it is Labour day and also the day when the French celebrate spring, Le Muguet comes into flower around the first of May and the French  buy it or pick it, as flowers, plants or arrangements to take as gifts to loved one's and close friends as a porte bonheur (good luck charm).  It is also the only day in France when people can sell flowers in the street without having a permit.
The tradition of Le Muguet reputedly began in the 16th century when the wedding banns were announced at the beginning of May and wreathes of Le Muguet were hung in the doorways of the brides-to-be.  Charles IX started giving them to the ladies of his court for luck. In the late 1800s, the international workers declared the first of May as May Day, in honour of the workers of the world, in France workers and their supporters wore Le Muguet boutonnieres. 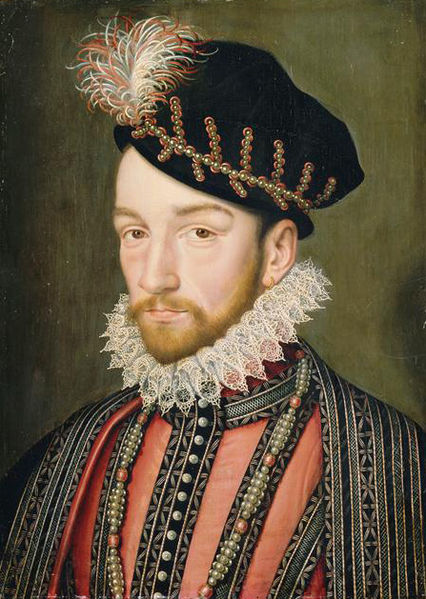 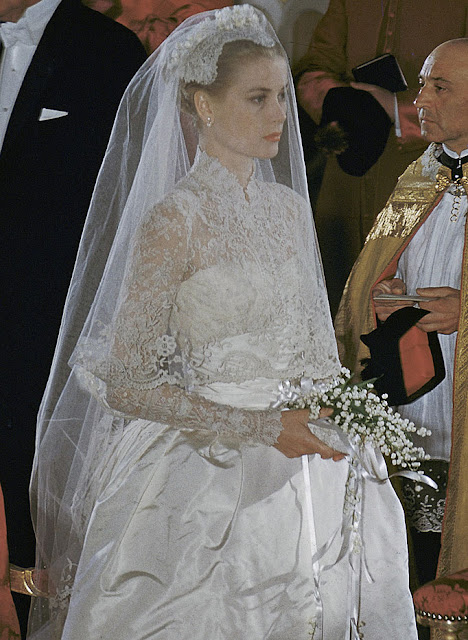 As we all have now seen The Duchess of Cambridge took inspiration for her wedding dress from Princess Grace of Monaco, who also married in April and also chose Lily of the Valley for her wedding bouquet.  I found out yesterday that it is customary for Royal brides who marry at Westminster Abbey, to leave their wedding bouquets at the tomb of the unknown soldier, I thought this rather lovely. 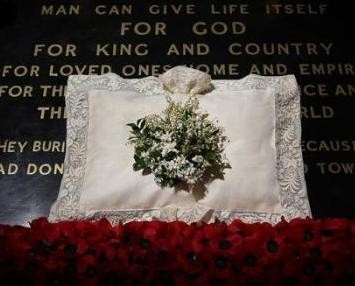 Kate's, wedding bouquet at the tomb of the unknown soldier in Westminster Abbey 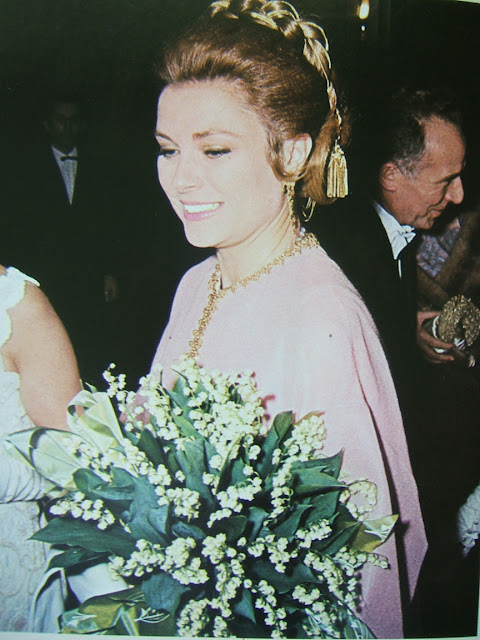 Princess Grace with Lily of the Valley she adored them 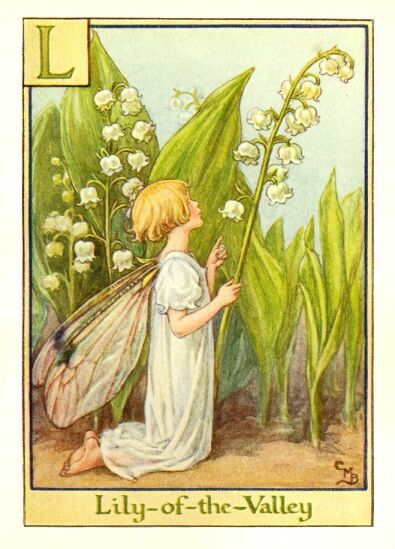 Illustration from 1934
I have always found them magical and associated them with childhood imaginings of fairy's at the bottom of the garden. 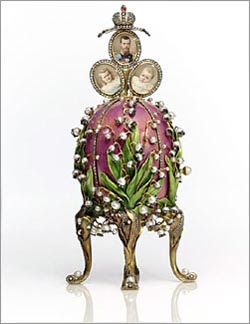 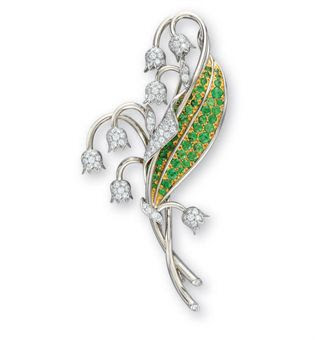 Lily of the Valley brooch from Tiffany's 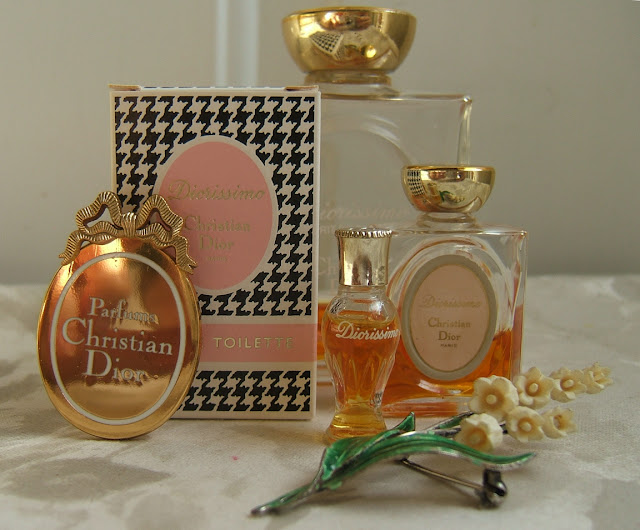 photo courtesy of squarewithflair.blogspot.com
Christian Dior used Lily of the Valley as his emblem for his brief but successful career, Le Muguet was the inspiration behind his Spring 1954 collection.  The classic and world famous fragrance 'Diorissimo' is based on Le Muguet but bear in mind no extract can be obtained from the natural flowers so all Muguet scents are reconstructions. Edmond Roudnitska, the great nose and master perfumer behind 'Diorissimo' spent a lot of his time on his hands and knees sniffing Le Muguet he planted in his own garden, whilst researching his attempt at recreating the scent. 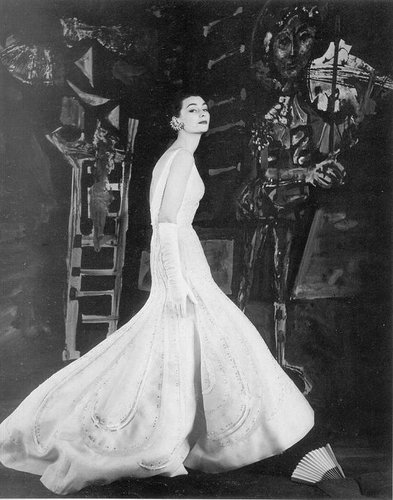 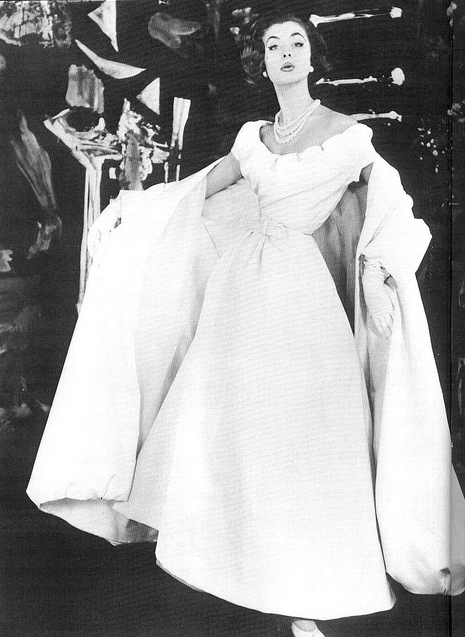 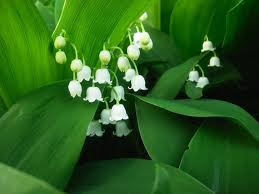 Labels: lily of the Valley, May day