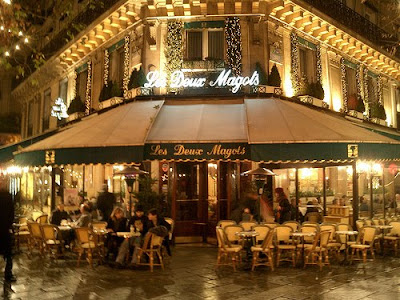 MG had recently moved to a lovely apartment in a hotel particulier, on Rue Jacob in the sixth arrondissement, so this was where we spent the first year of our life together, looking back I realise how privileged we were, living just around the corner from the three famous cafés, Les deux magots, café de Flore and Brasserie Lipp. As I finished work earlier than MG I often used to get a table outside Les deux Magots, order an aperitif, read my book and wait for him to join me. It was bliss, I became a real left bank girl, spending hours exploring and wandering around the labyrinth of streets in the Latin quarter. We did a lot of shopping, wining and dining and at weekends when we didn't have friends staying, we would often get out of the city and explore new places such as Deauville, Hornfleur, St Malo, Fontainbleu, The Loire and lots of other places.

After about a year the contract was up on our apartment and we had to look for another. Now anybody who has rented an appartment in Paris will know this is easier said than done, you see one advertised, either in the paper, Fusac or through an immoblier, then you usually turn up to a mass viewing, and if you want it, you more or less have to decide on the spot. Most importantly you need to have all the right paperwork with you, proof of earnings, ID, references etc. so that the agent can decide who is the most suitable, earns the most money etc. It took a while and a few viewings to get our duplicate packs spot on, then either MG or myself whoever was nearer and available would go to a viewing and if it looked promising call the other and describe it. Rue Jacob was a hard act to follow but many viewings later we moved into an apartment on Rue Lord Byron (Great name) in the eighth, Just off the Champs Elysées.

The apartment was lovely, however I had become attached to the left Bank and most people who live in Paris hardly ever go on the Champ as it can be a tourist trap and most of the establishments on the Champ are overrated and overpriced.

Shortly after moving I got a new job, miles out of central Paris, I had to get the RER to Massy-Palaiseu and then take a special coach to the industrial Park where the office was, this took about an hour each way. The good news was the company paid half my travel costs and gave me a book of luncheon vouchers, worth around €120.00 a month, as the only eating establishment in the industrial park was a Buffalo Grill, I took a packed lunch and blew the entire book every month, in a fancy restaurant (Just about all restaurants in France, from the most humble to the grandest, accept luncheon vouchers) and treated MG to a slap up meal.

At the end of our second year, disaster struck, MG'S work contract was not renewed and the bottom had fallen out of his industry, so he was finding it difficult to find a new position. We could no longer afford to stay at the apartment.

Some of Samplers favourite resturants in Paris