Giovanni Boldini The King Of Swish 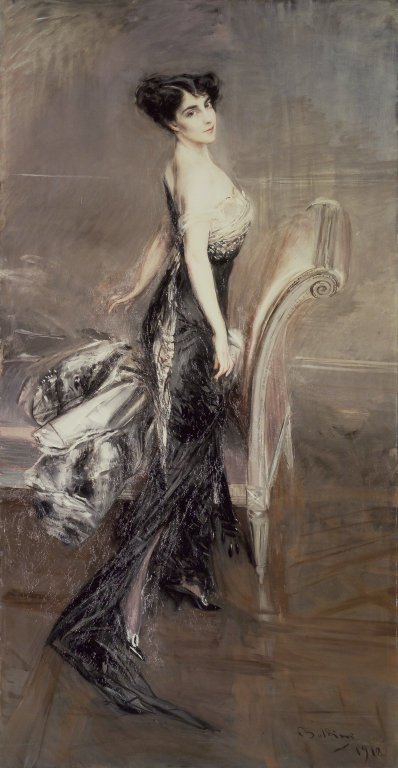 'Portrait of a Lady'
Continuing with the theme of fashion inspired by history, I thought I would do a post on one of my favourite painter's Giovanni Boldini.  Anybody who was anybody at the end of the nineteenth and early twentieth century had their portrait painted by him, he was the Mario Testino of his day.  His works continue to inspire.


Giovanni Boldini enjoyed a long and successful artistic career (b.1842 - d.1931). Born in Ferrara, Italy in 1842 and trained on the Italian Renaissance masters from childhood with his religious artist-father, Antonio Boldini.
He also studied under other accomplished artists, gaining a reputation even at that young age as an accomplished portrait painter. He then studied in Florence at the age of 20, at the Scuola del nudo (the School of Nudes), a subject he would return to only in old age. 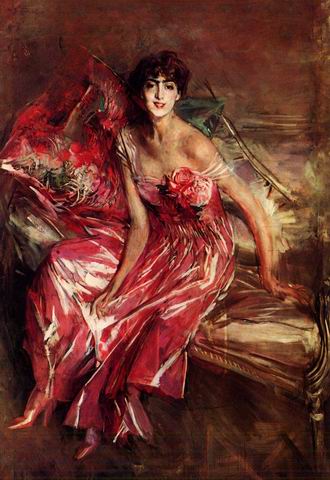 'Lady In Red'
Giovanni combined work and study for many years, training in Paris and London, and Holland and Germany. He moved to Paris but continued traveling for his work. He developed his own, distinct style, and his portraits grew in fame, helped greatly by a portrait commissioned by Giuseppe Verdi in 1886, the biggest celebrity of his day.
Verdi gave Boldini an introduction into the world of opera, which led to many commissions for portraits, and to many intimate paintings of opera fans in theatres and cafes around Europe. 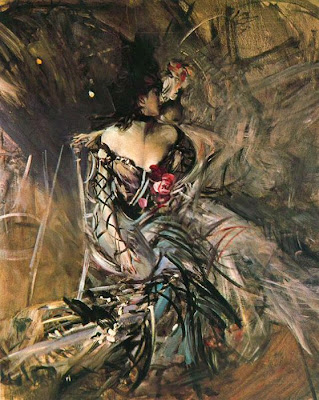 'Spanish Dancer at the Moulin Rouge'


You can see his paintings in museums around the world, including the N.Y. Metropolitan Museum, the Musee d'Orsay in Paris, the National Portrait Gallery in London, the Legion of Honor Fine Arts Museum in San Francisco, and the National Gallery of Australia. And his paintings are reproduced on prints, posters and greeting cards.
But most of Boldini's paintings remain in private collections. This is because most of his paintings were commissioned portraits, society portraits. Everyone who was anyone HAD to have their portrait (or their wife's portrait) painted by Boldini. 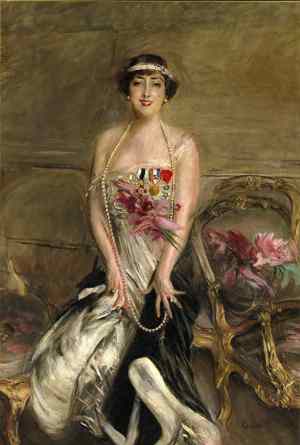 
Boldini's paintings showed his subject in soft-focus, elongated, in movement, alive, and sophisticated. He was even dubbed the King of Swish, and looking at his portraits of women, you can see why. His portraits were flattering.
The brush work on his paintings was swift and bold. It is the masterful brushwork that gives his paintings the sense of motion. 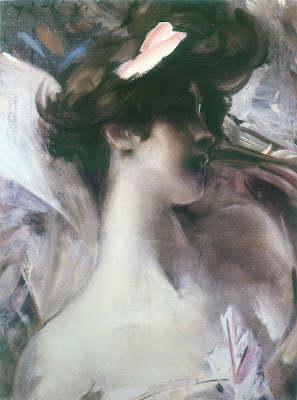 'Testa di Giovane'
He also painted landscapes in the naturalistic style of his day, influenced by the Macchiaioli schooled artists he knew in Florence, and worked on engravings, with pastels, watercolors and etchings. Only toward the end of his long life, did his style change, becoming more impressionistic (possibly due to his failing eyesight), using mainly dark, rich colors.
His subjects changed as well. He no longer relied on portraits for a living, so he began painting subjects he wanted to paint, which seemed to be lots of nude women. Perhaps this was just his Italian nature exerting itself, and a return to his preferred youthful choice of subject.


Another change that came late in life was the bachelor Boldini finally married. To quote from a magazine article:
In 1929, aged 86, he suddenly married. At his wedding breakfast he made a little speech:
"It is not my fault if I am so old, it's something which has happened to me all at once." 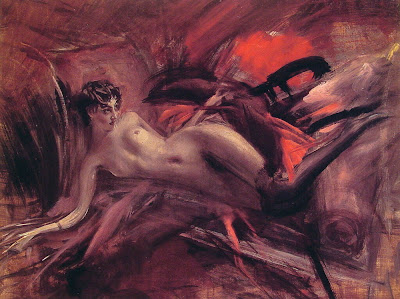 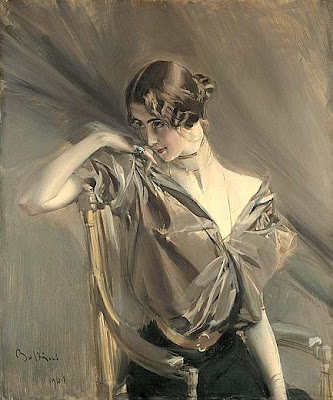 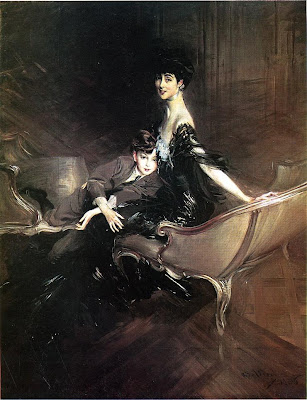 'Consuelo Duchess of Marlborough with her Son, Ivor Spencer Churchill'
'Marchesa Luisa Casati with a Greyhound' Go here to find out more about her. 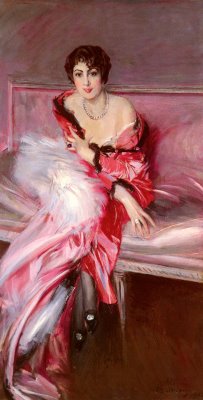 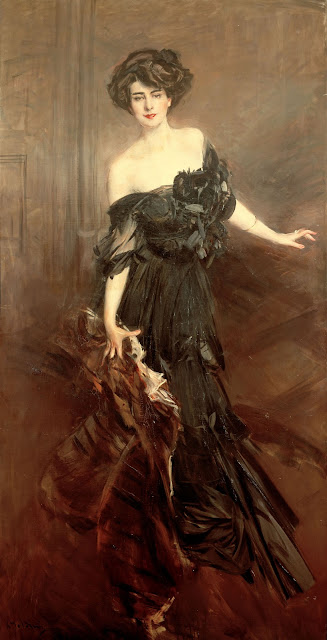 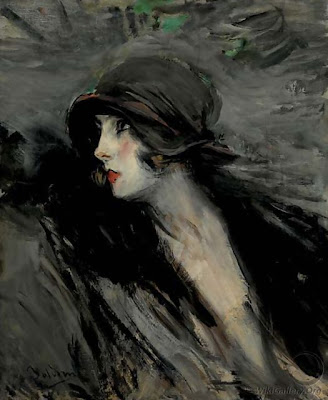 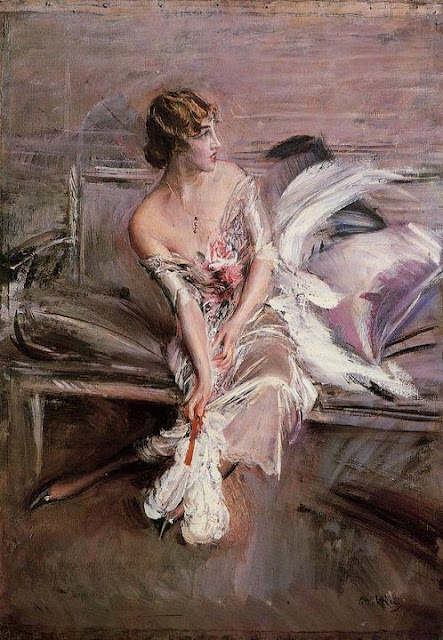 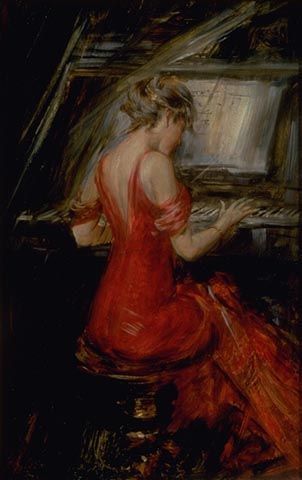 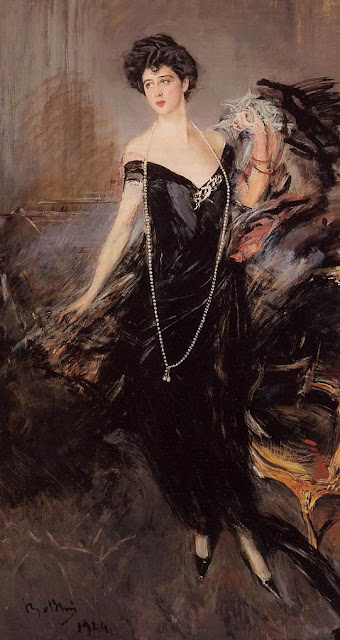 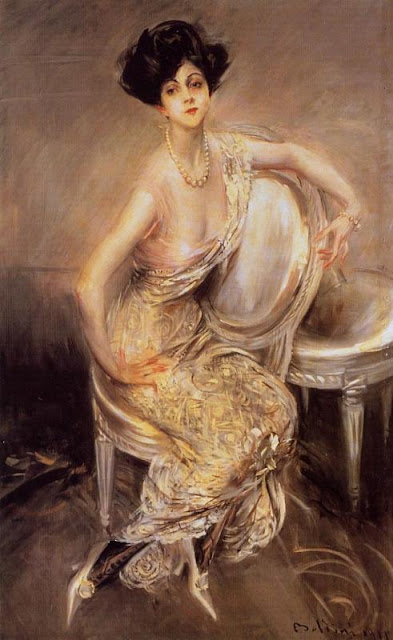 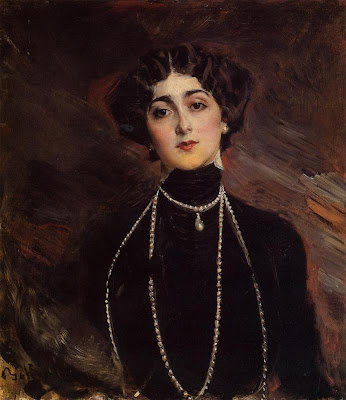 'Lina Caverlieri' Go here to read all about her. 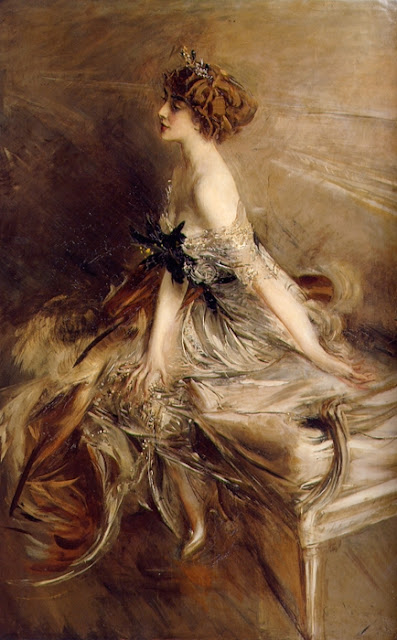 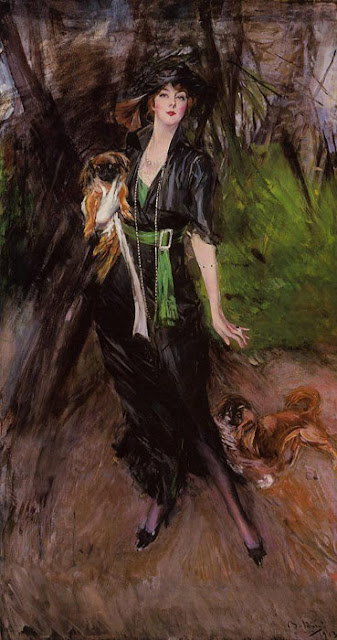 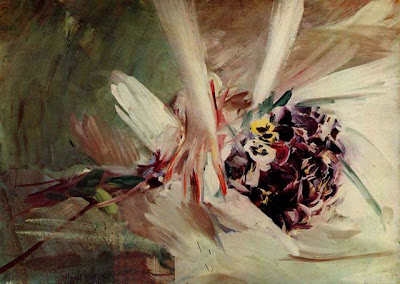 'The Pansies'
I love this painting it looks like the subject was picking them up, off the stage, after a successful performance at the opera or ballet. 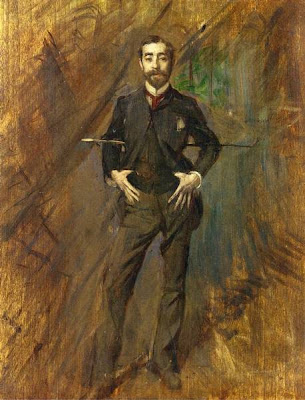 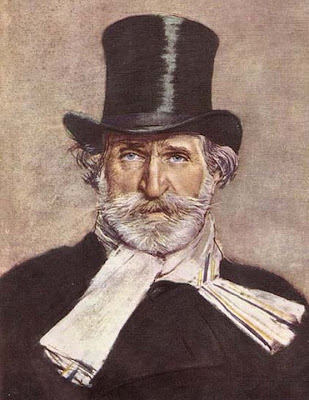 'Giuseppe Verdi'
The breakthrough portrait which launched his career 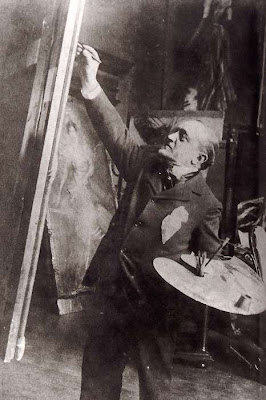 Boldini at his easel
Whilst doing my research for this post I read, fairly recently in a house in Pigalle, Paris, which had been locked up and left empty for over seventy years a Boldini was discovered amongst the cobwebs, it sold at auction for 2.1 million euros.  If you don't have one languishing in your attic you can always order a hand painted reproduction for a fraction of the cost from here.
I would like to thank the wonderful and talented Mrs Jones for inspiring me to do this post, to find out what's been inspiring Mrs Jones visit her fabulous blog here.
Posted by Dash at 2:31 PM