The other night we watched Jamie Olivers latest offering: 'Jamie Does Marrakesh'.  It was excellent, and it brought back memories of my fortieth birthday a couple of years ago, when MG treated me to three days in Marrakesh.
MG surprised me by announcing we were going there, I had never been and he knew it was on the top of my wish list for places to visit.  MG said it was up to me to choose accommodation. I knew two things, I wanted to stay in a beautiful riad, preferably with a pool and I wanted to stay in the heart of the Medina.  So I busily started researching riads, there are loads of websites advertising cool and hip places to stay in Marrakesh, a lot of my first choices were fully booked, but eventually I found a charming riad, very tastefully refurbished, owned by some arty types from New York, right in the heart of the Medina and it had a pool.
We were picked up from the airport by the manager of the riad, I will never forget my first impressions of Marrakesh, talk about a culture shock!  We got to the walls of the Medina and MG, myself and the manager all got out of the taxi.  From nowhere a small toothless man in a djellaba appeared, wielding a small wooden cart  he put our luggage into the cart and trotted off at a great pace, at first I thought he was making off with our luggage then it dawned on me that he was a riad porter.
We followed him through a labyrinth of alleyways, full of people, donkeys, carts, people selling their wears, there was stuff going on everywhere it was like returning to biblical times, I felt I was in the set for  'The Life Of Brian' or some other biblical epic.  The alleyways got smaller and smaller, we were twisting and turning all over the place, eventually we got to a small, ancient, arched, wooden door, the manager opened it and we stepped into another world. 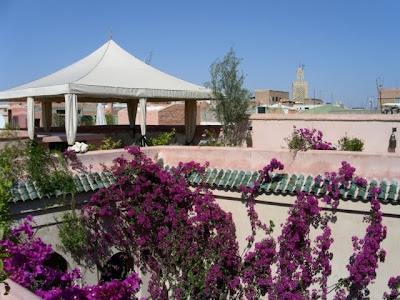 The Riad
It was an oasis and a complete contrast to what was going on outside in the Medina, we sat down and relaxed in the courtyard on big comfy sofas, it was then that I saw the pool, which was lovely with rose petals floating in it, but far too small to swim in, purely decorative or big enough to bathe, a la Cleopatra.  We were served mint tea and we unwound from our travels, then we went to unpack in our beautiful room with en suite and got ready to do some serious exploring. 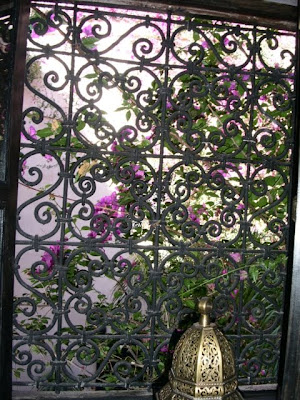 The window in our room
We decided to go and check out Djamma El Fna, the big square at the heart of the Medina, on route we took in the sights and sounds of The Souk, the only way to describe it 'A feast for all the senses' and if you see something you want to buy, I recommend you buy it immediately as you will never be able to find that shop again!  We got to the Square just at sunset, it was magnificent and full of snake charmers, dancers, magicians, soothsayers, tooth pullers and all manner of other things, the makeshift restaurants were just setting up for the night, it was amazing.
We wondered around and found a restaurant, not one of the eateries in the square, we would have loved to have eaten there, but they do not serve alcohol and we needed wine.  After dinner and some nightime wandering involving several stops for mint tea, we decided to amble back to our riad, this is where the problems started.
I thought I had a good sense of direction, not in the Medina in Marrakesh I don't! We got totally lost, all the landmarks that were there earlier had gone, closed up for the night, the busy alleyways are completely different in the dark, quiet and eerie, we wandered around for more than an hour, I kept saying 'I am sure it's down this one', no, wrong again.  We did have a map of the Medina, but believe me it's useless, MG was getting increasingly grumpy and in a fit of temper tantrum, he threw the map away, eventually we had to call the manager to come and get us, which was tricky as we did not know where we were but he found us and led us back to the riad.  We only managed to find the riad once on our own and that was in daylight! 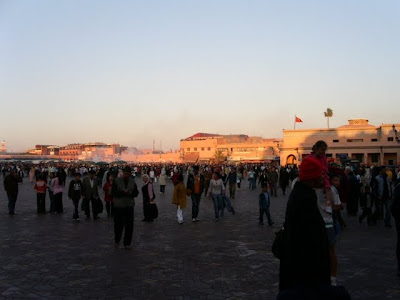 Djamma El Fna
We also explored the French quarter of Marrakesh which is a complete contrast to The Medina, very French with smart boutiques, trendy restaurants, big swanky hotels, chi chi boutique hotels and lots of chic ladies with equally chic dogs on leads. We ended up walking everywhere as the taxi drivers were on strike, we did get a caleche (horse and carriage taxi) when my feet gave out, but I was a bit choosy about caleches, I only wanted to go in ones where the horse looked in good condition, there were so many horses clearly not looked after properly and if the horse looked unwell, so did the carriage, threadbare upholstery and peeling paintwork etc.
One of the places I had to see was the Majorelle Gardens well what can I say, they were absolutely stunning and you have not seen blue, until you have seen the blue in the Majorelle Gardens! 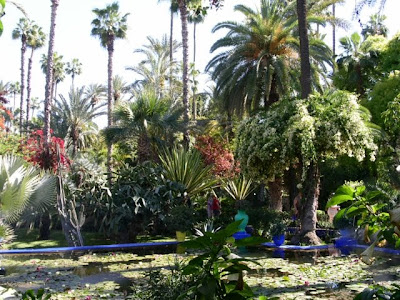 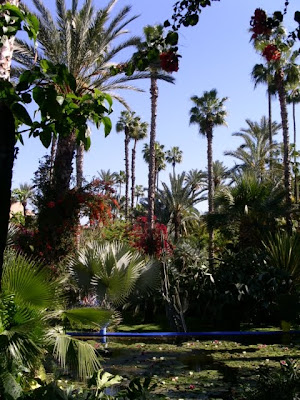 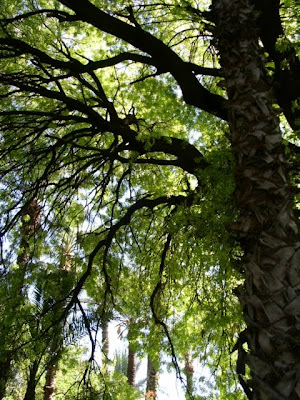 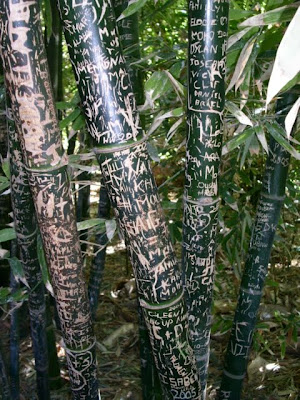 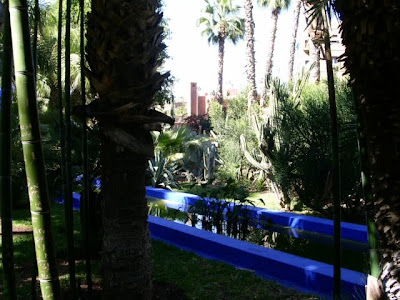 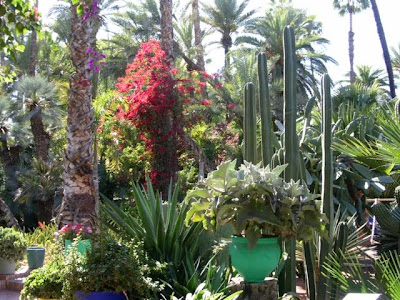 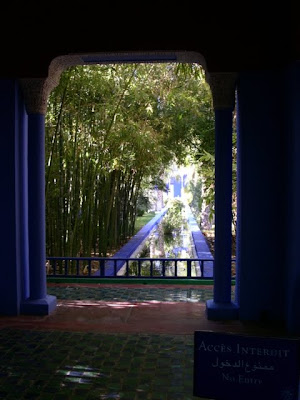 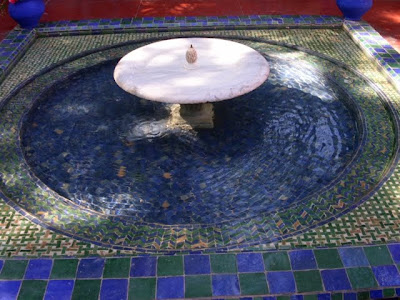 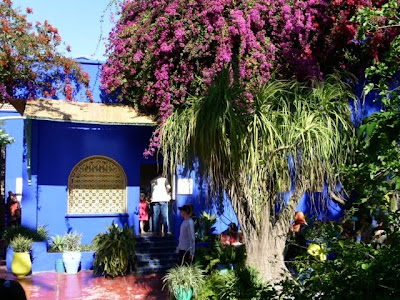 Majorell Gardens
On our last night MG took me out for my birthday dinner, we dined at The Dar Moha, one of Marrakesh's premier restaurants, in the former home of the French fashion designer Pierre Balmain.
It was a magical evening, the surroundings were exquisite, we dined outside by the pool in candlelight, the food was sublime, there were musicians playing and a little bird had told the staff it was my birthday, they presented me with a wonderful cake, on the house! 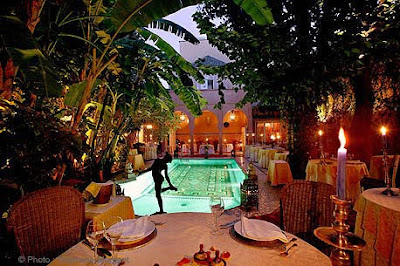 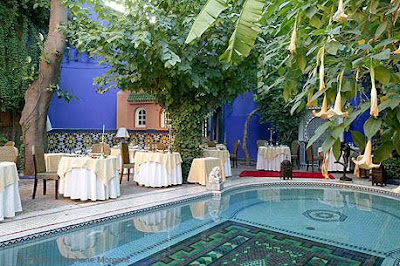 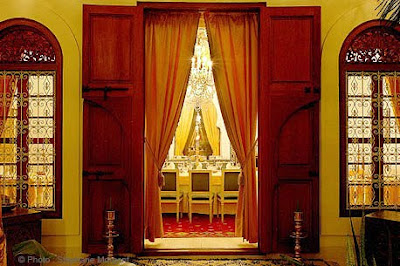 Dar Moha
Marrakesh was wonderful and three days really weren't enough. After watching Jamie's program we both agreed we would like to return.  I am glad we stayed at the riad in the heart of the Medina, but next time we will stay somewhere that we will be able to find!
Posted by Dash at 5:47 PM