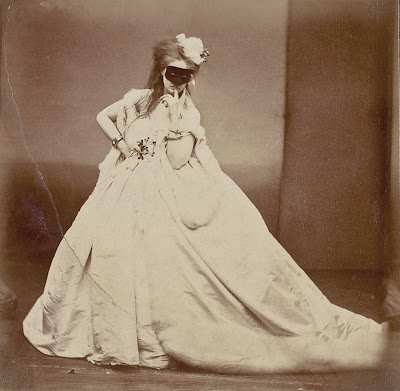 
Apologies to none history lovers for bringing you another demi-mondaine post so soon after Lady Emma, on my internet wanderings I came across some photographs of The Countess di Castiglione and I knew I had to do a post about her.

Virginia Oldoini, Countess di Castiglione (22 March 1837 – 28 November 1899), better known as La Castiglione, was an Italian courtesan and secret agent who achieved notoriety as a mistress of Emperor Napoleon III of France. She was an advocate for Italian unification through the influence she had upon the Emperor. She was also a significant figure in the early history of photography as a collaborator of photographer Pierre-Louis Pierson. 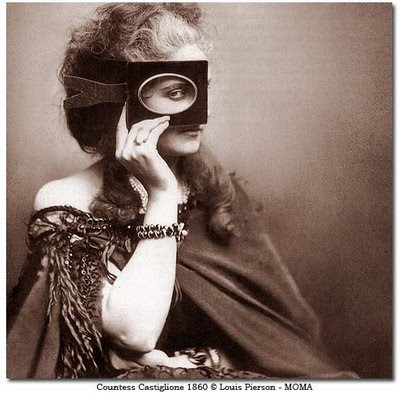 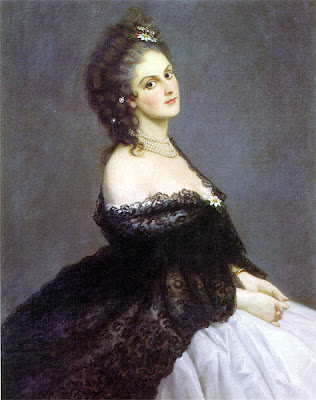 Portrait of the Countess di Castiglione painted in Paris, 1862 by Michele Gordigiani
Her cousin, Camillo, conte di Cavour, was a minister to Victor Emmanuel II, king of Sardinia, Piedmont and Savoy. When the Castigliones traveled to Paris in 1855, the Countess was under her cousin's instructions to plead the cause of Italian unity with Napoleon III of France. She achieved notoriety by becoming Napoleon III's mistress, a scandal that led her husband to demand a marital separation. During her two years' relationship with the French emperor (1856-1857), she was permitted to enter the very exclusive circle of European royalty. Among others she met Augusta of Saxe-Weimar, Otto von Bismarck and Adolphe Thiers. 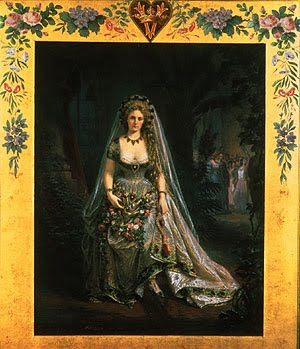 Queen Of Hearts
The Countess was known for her "divine beauty" and flamboyant entrances in elaborate dress at the imperial court. One of her most infamous outfits was a "Queen of Hearts" costume. A portrait of the Countess was painted by George Frederic Watts in 1857. In 1856 she began sitting for Mayer and Pierson, the favoured photographers of the imperial court. She was described as having long, wavy blonde hair, pale skin, a delicate oval face, and eyes which changed colour constantly from green to an extraordinary blue-violet Over the next four decades she would direct Pierre-Louis Pierson to help her create 700 different photographs in which she re-created the signature moments of her life for the camera. Her part in the creation of these art works is often overlooked due to other aspects in her life but she was in fact fully in control and used Pierre-Louis Pierson as a instrument in the realisation of her own personal fantasies. 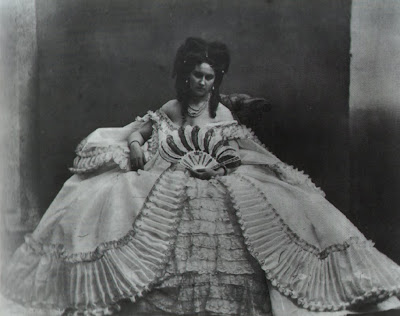 Louis Pierson
She paid a large amount of her own personal fortune for the right to do this, often getting into debt as a result. Most of the photographs depicted the Countess in her theatrical outfits, such as the Queen of Hearts dress. A number of photographs depicted the Countess in ways that were undoubtedly risqué for the era, notably, images that expose her bare legs or feet. In these photos, her head has been cropped out. 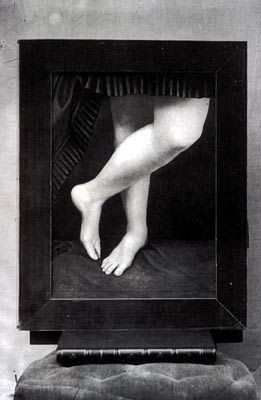 By 1857 the brief affair with Napoleon III was over, inducing her to return to Italy. Four years later, the Kingdom of Italy was proclaimed, conceivably in part due to the influence that the Countess had exerted on Napoleon III. That same year, she returned to France and settled in Passy.
Just after the defeat of France during the Franco-Prussian War in 1871, she was called to meet, in secret, Otto von Bismarck to explain to him how the German occupation of Paris could be fatal. She may have succeeded, as Paris stayed free of Prussian occupation. 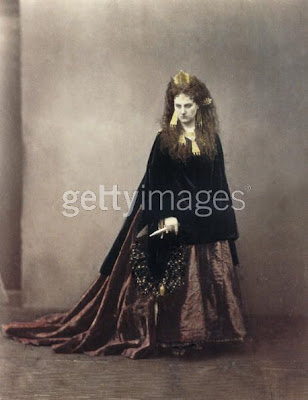 Louis Pierson
Virginia spent her declining years in an apartment in the Place Vendôme, where she had the rooms decorated in funereal black, the blinds kept drawn, and mirrors banished—apparently so she would not have to confront her advancing age and loss of beauty. She would only leave the apartment at night. In the 1890s she began a brief collaboration with Pierson again, though her later photographs clearly show her loss of any critical judgement, possible due to her growing mental instability. She wished to set up an exhibit of her photographs at the Exposition Universelle (1900), though this did not happen. On November 28, 1899, she died at age sixty-two, and was buried at the Père Lachaise Cemetery in Paris. 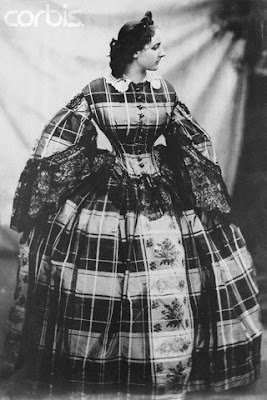 Robert de Montesquiou, a Symbolist poet, dandy and avid art collector, was fascinated by the Countess di Castiglione. He spent thirteen years writing her biography, La Divine Comtesse, published in 1913. After her death, he collected 433 of her photographs, all now preserved at the Metropolitan Museum of Art
The Countess's life was depicted in a 1955 French film, La Contessa di Castiglione, that starred Yvonne de Carlo.

Some of the Photographs are so contemporary it is hard to believe they were taken in the nineteenth century.
I wonder what she would have become had she been born in our times?