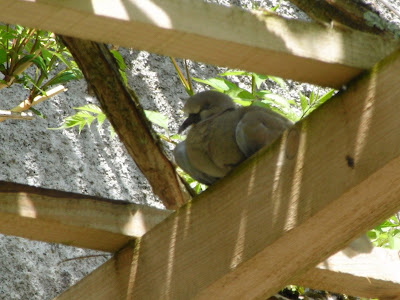 I know spring is definitely on it's way now, as this morning, for the first time I heard the beautiful sound of doves cooing in the garden.
In spring, a couple of years ago we had several pairs of nesting doves in our garden, one day when we were about to take Crusoe for a walk, we discovered a little dove chick, floundering on the ground in the courtyard.  We quickly picked him up, before Crusoe could discover him and snaffle him between his eager jaws.
MG carefully brought him inside and we found a little cardboard box and lined it with kitchen roll, I then rushed upstairs to the office, got on the computer and googled baby bird care.  After gleaning some new found knowledge on baby birds, we then put some drops of water, via a pipette on his beak, which he licked thirstily. According to the information I had read, doves are terrible nest builders, so our little chick, had probably fallen out of the family home, however doves are very good parents, and if you put the chick somewhere outside, the parents will locate them and continue to feed and care for them until they fledge.
So we taped the new chick home into a tree, and watched and waited anxiously. At first nothing happened, little chick was making strange squawking noises, rearing out of his new home and attempted to flap his fragile wings. 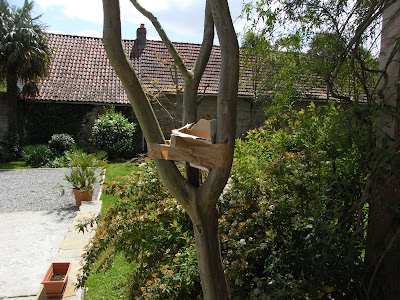 Eureka, a few hours later the parents managed to locate him, and for the next few days we watched the parents frequent coming's and going's, always with tasty morsels for their errant chick.
One morning, he had vanished, he had obviously flown the nest, but on closer inspection we found he had not gone far, he was hanging out in the Gazebo, where his parents were still able to feed him. 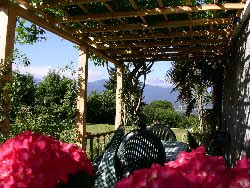 He stayed in the Gazebo for a few days, growing big and strong, we visited every day, and he even let us stroke his tiny head, then one day, just like that he had gone.

I would like to think that the dove I heard this morning was our chick, returning with his mate, ready to nest and rear his own young in our garden. 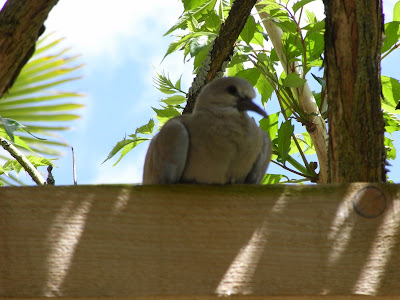