Off to The Cote d'Azur 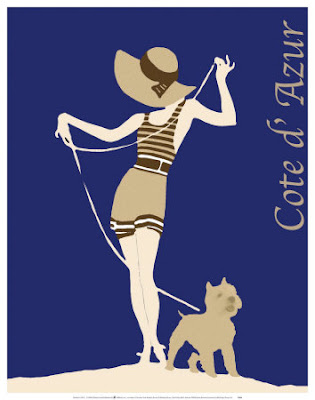 Poster designed by Susan W Berman
On Thursday we are off to Belle Mère's for a week, she is moving house after more than thirty years in the same property, she has decided to downsize, within the same area, but closer to the centre. So we are hiring a van and going over to help.  She has sold her property but unfortunately due to French bureaucratic complications she cannot yet go ahead with the house she wants to buy.

For the time being, she is putting her belongings into storage and moving into rented accommodation.  She has been getting up at 5am every morning to try and pack without distractions and at the last count she had packed 56 cartons. 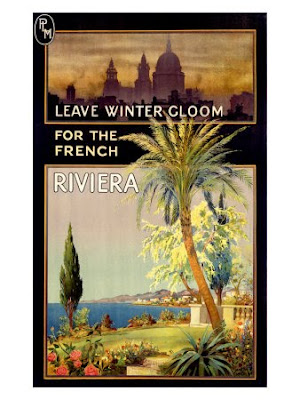 I am never quite sure where to say I am going when I visit Belle Mère as The South of France is very complicated name wise: The Riviera, The Cote d'Azur, The Mediterranean Coast, Provence, PACA, (Provence, Alps, Cote d'Azur). The Var, The Cote Varoise. You could say that Belle Mère lives in all of these places.
The name the Cote d'Azur was coined in 1887 by the writer Stephén Liégeard in his book The Cote d'Azur, obviously he named it after the stunning colour of the Mediterranean.
There has always been dispute over The Cote d'Azur/Riviera's western boundaries, some say it's at Hyères in the département of the Var and others, Cassis in the département of the Bouches-du-Rhone. I think it depends where you live, let's not beat about the bush, to say you live on the cote d'Azur, is to live, in one of the most glamorous and desirable locations in the world. (It makes me feel hoity toity, just saying it!). 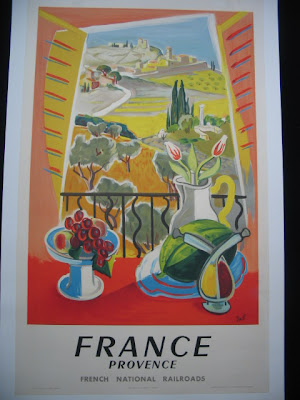 Posters available from art.com
I hope we will be able to get there, as the oil refinery workers have gone on strike, not sure for how long. I hope the van we hire has a full tank of petrol, and what happens when we get there, after a six hour drive, we might not be able to move Belle Mère, no petrol, diesel, flights, trains, taxis, supermarket deliveries, removal men! Nothing, the whole of France could come to a grinding halt.

When we do get there we will work hard and play hard, I think Belle Mère has got some interesting things lined up for us, so I will be taking my camera and sharing my experiences with you.

Posting and commenting on your lovely blogs could be a bit sketchy for the next week, as MG and I will be busy, and sharing (fighting over!) The laptop, but I will do my best.