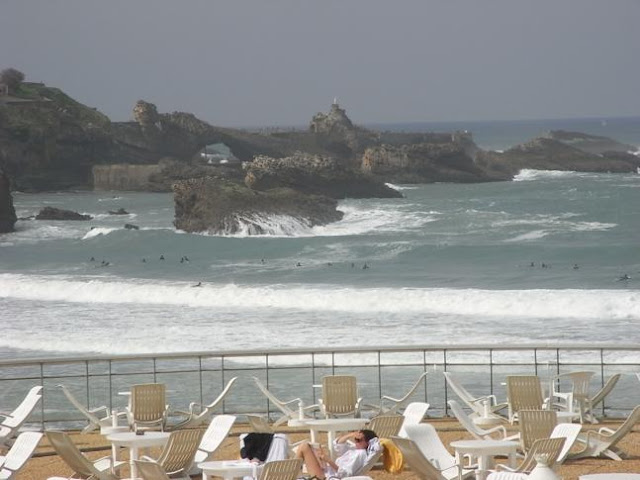 Biarritz, Saturday Morning, look at all the surfers in the sea, waiting to ride a wave, most of them have been there since sunrise!


It's my Birthday on Monday, a very boring day to have a Birthday on, so as the weather forecast looked good for the weekend I decided I would like to go to Biarritz for my Birthday, Saturday was the allotted day, I was quite happy to go for the day as it's only an hour and half away by car, yesterday MG decided on the spur of the moment that we should go instantaneously and spend the night, (Friday) he spent some time on the internet looking for a hotel that had availability, a secure car park and accepted dogs, he found one and booked, then announced, I had to get ready.
I was in disarray, chucking things into an overnight bag, the weather has changed dramatically here, yesterday was like a Summers day, what should I take?  Oh God, I am overdue for a leg wax and a pedicure, oh God what shoes, shoes... where is that pretty white bra?  Oh God it's in the laundry basket, which draw are the others in?  Do I need to take a bikini?  No the sea will be freezing, there might be a pool, pool... where is that bikini?  Can't find it never mind, chuck that in instead and that...   twenty minutes later I was ready. 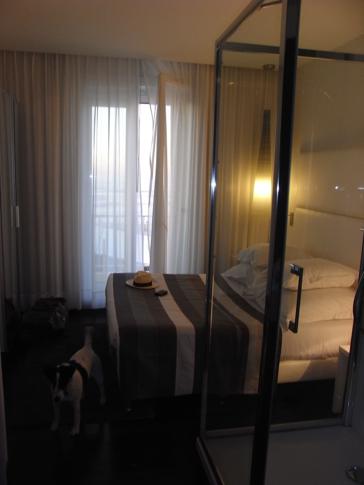 Around an hour later (MG drove like a bat out of hell) we were in Biarritz, mind you it took half an hour to negotiate our way round the Biarritz one way system (with GPS) before we found the hotel, which was located right on the seafront.
We stayed at The Hotel Windsor which looked like it had been recently done out in boutique style, it was immaculate, clean and the staff at the reception were charming, the room was small but perfectly formed, comfortable, clean, with excellent linen and four plump pillows, (normally French hotels only provide, two pillows, with a spare in the wardrobe, why?  I have no idea).  The room was quirky and 'open plan' the bathroom was in the bedroom partitioned by the shower, which was in the middle of the room, I have never come across this before, obviously some kind of space maximisation tactic (you would be hard pushed to find a hotel room here in the high season, so seafront hotels can charge top dollar) there was no bath but the loo was separate with a door! 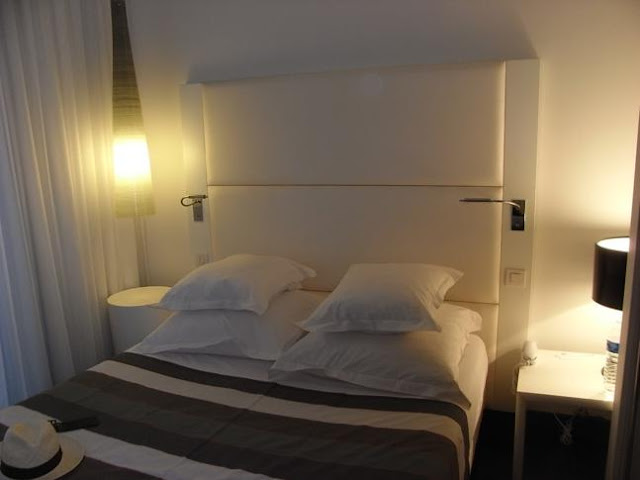 We opened the small balcony doors and looked at the view... 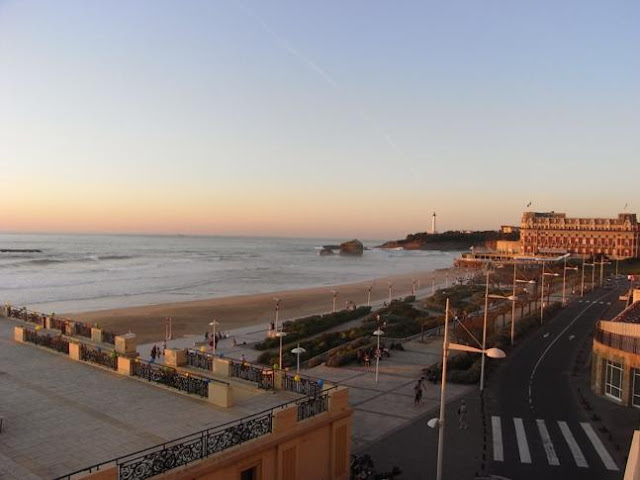 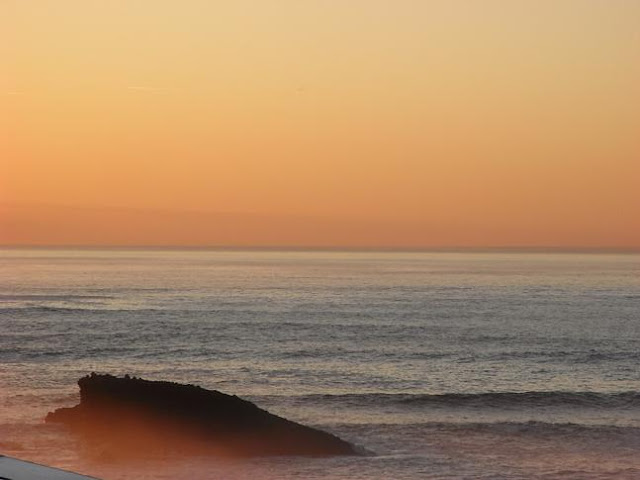 Gorgeous, we knew, that night, we would drift off to sleep with the sound of Atlantic waves.
We have not been to Biarritz for about seven years, last time we came, this magnificent resort was looking a bit tired and jaded.  Not any more! Biarritz has had a facelift and been sympathetically rejuvenated in keeping with it's lustrous past, it's the surfing capital of Europe, the hip and the trendy rub shoulders with the elegant and the glamorous.  Biarritz is located on France's South West Atlantic coast, close to the Spanish border, in the Basque country and remains true to it's Basque roots, adding culture, great food and bonhomie to the mix.  Biarritz has been restored to it's former glory, not to mention it's natural beauty and stunning coastline and can happily compete with it's counterparts on The Cote d'Azur.
Biarritz is a popular destination and one of the earliest coastal resorts in France and it's all thanks to one lady, you can't really write about Biarritz without mentioning Empress Eugenie and her summer Villa (Palace) known as Villa Eugenie, now the Super luxurious Hotel du Palais. 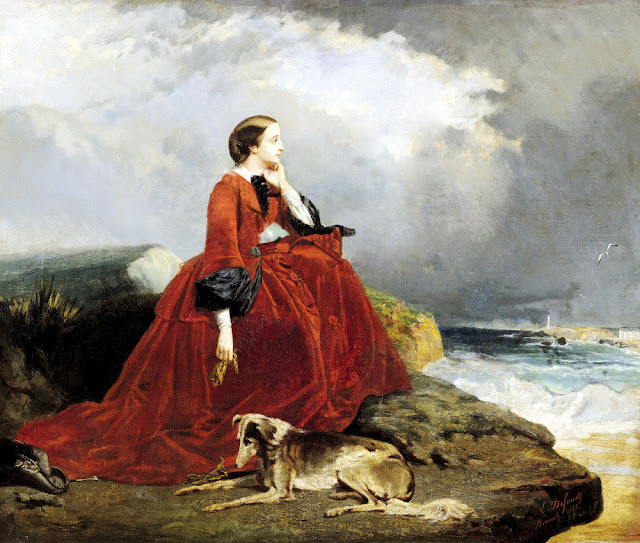 The Empress Eugenie in Biarritz 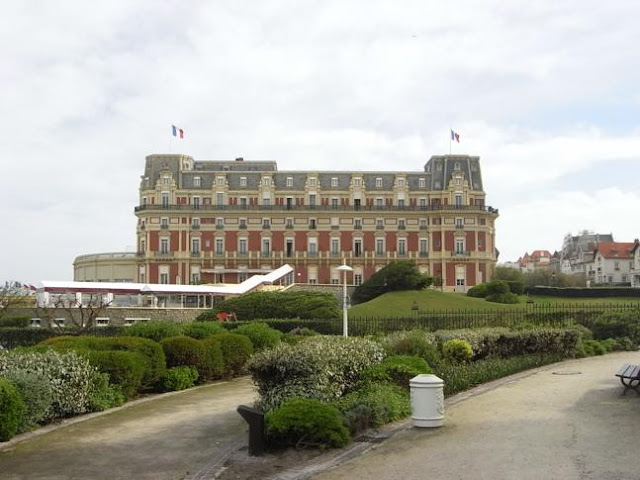 The Hotel Du Palais, can you believe it took only ten months to build, there must have been thousands working on it! 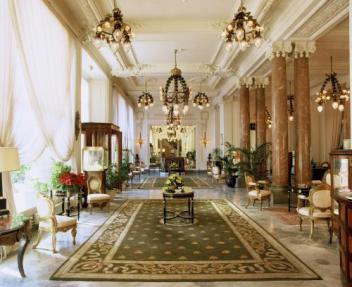 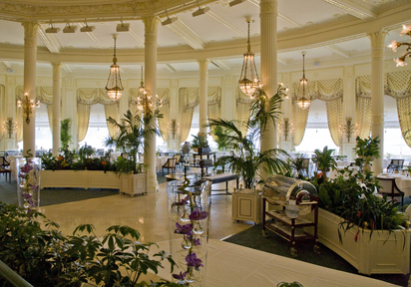 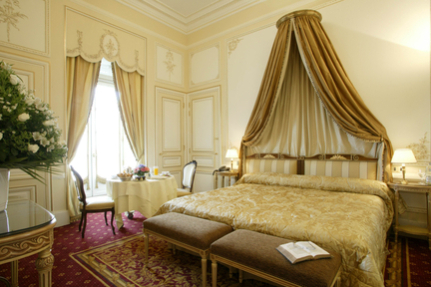 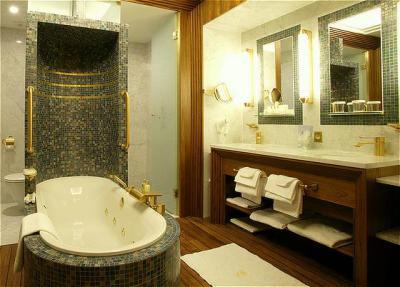 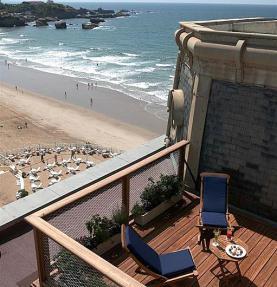 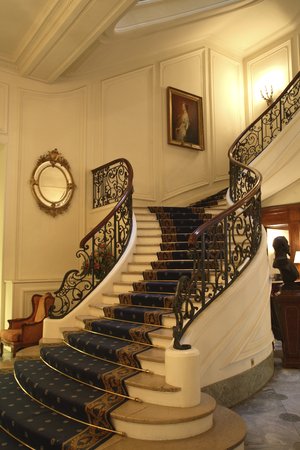 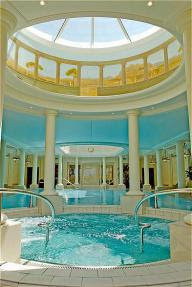 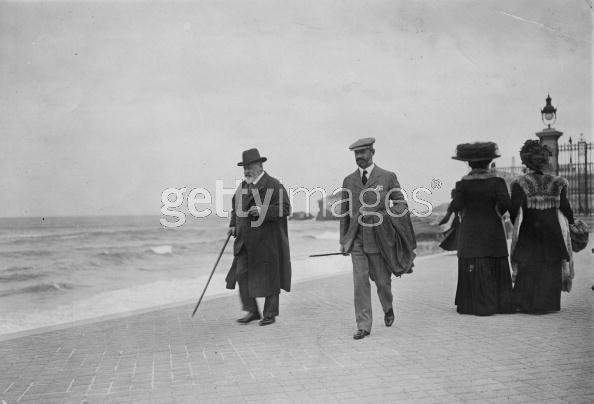 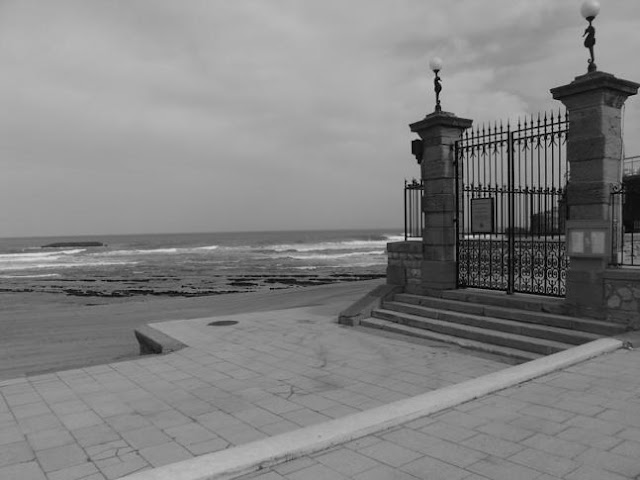 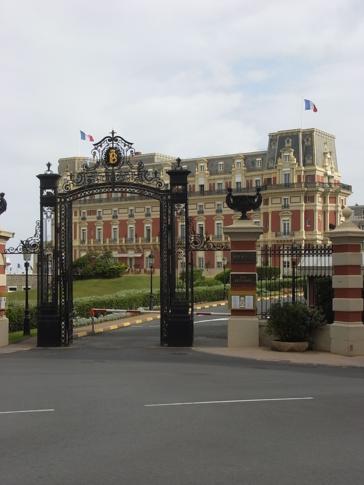 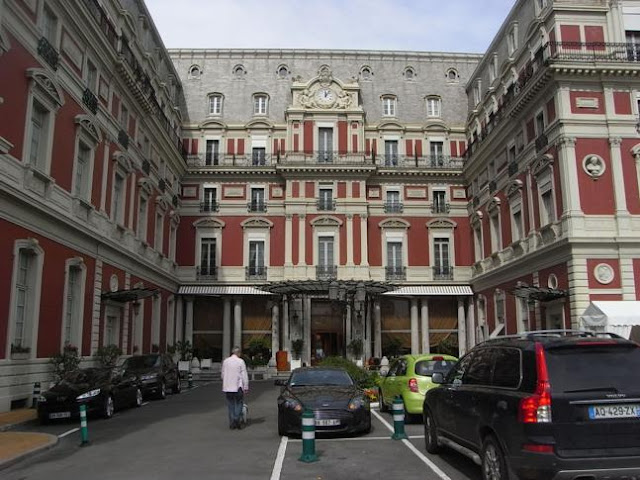 To read all about the fascinating and romantic history of Biarritz, Empress Eugenie and The Hotel Du Palais click here 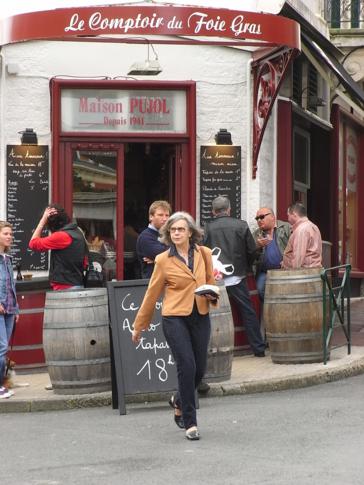 When we arrived at the hotel on Friday evening it was already around 8pm, I was feeling a bit crumpled but had no time to change, I just had time to freshen up my make up.  We got some great recommendations for places to eat and drink from the charming hotel staff, there is no shortage of fantastic bars, cafes and restaurants in Biarritz but we were told to head towards the market place, we did and found Le Comptoir du Foie Gras, which was buzzing, it's a tapas bar specialising in regional products.  As the weather was positively balmy everyone was standing outside on the pavement in full summer garb, the atmosphere was great and some great tunes were playing subtly in the background, the tapas looked wonderful so we ordered some, it was so delicious we ended up ordering four plates and stayed there for hours, we never made it out for dinner as we were quite happy where we were and after consuming a lot tapas we were happily stuffed! 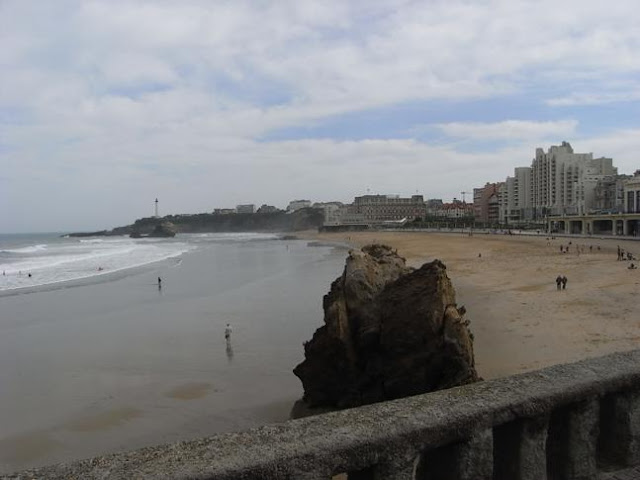 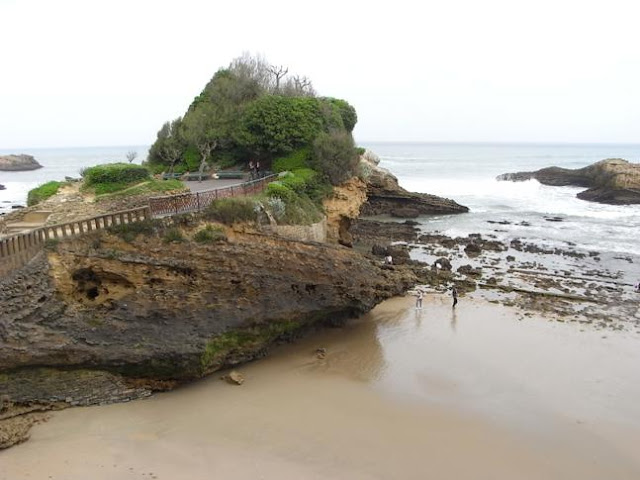 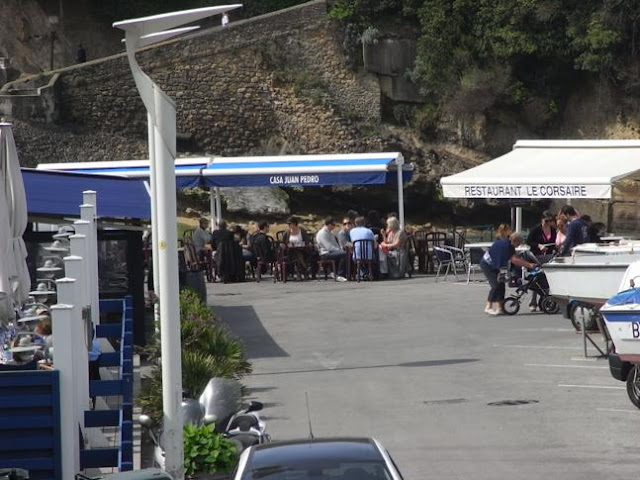 
After an excellent nights sleep,  on Saturday morning we went for a long walk along the beach, followed by a pre lunch aperitif,  Champagne in the Hotel du Palais, Crusoe was welcomed too and thoroughly enjoyed having a good old roll on the sumptuous carpets!  Then we headed off to the rustic Old Port for lunch, the best place to go for fish and sea food, the very plump Gulls kept us amused, once again the food was excellent. 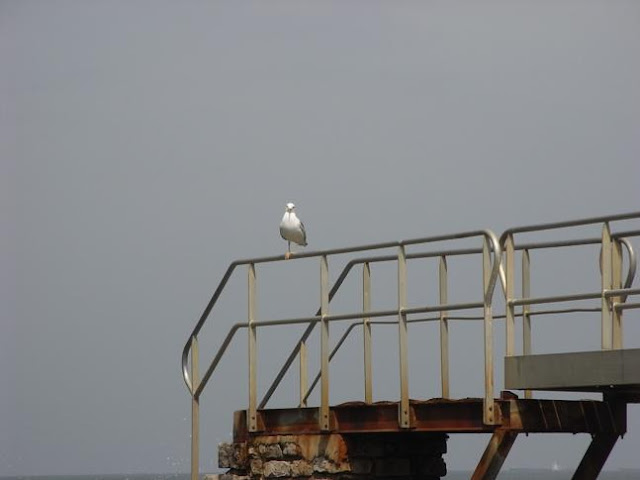 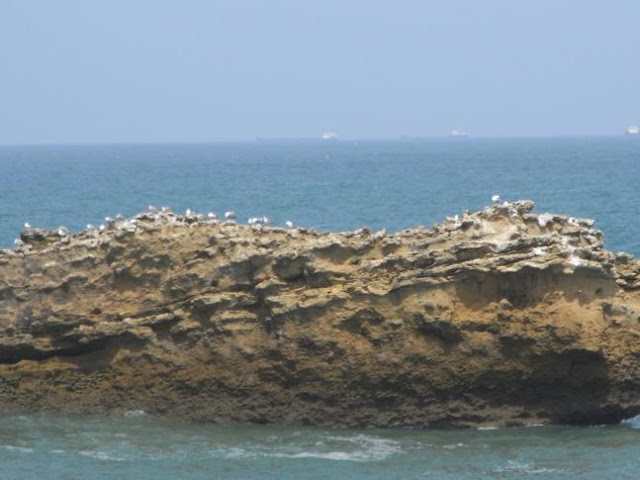 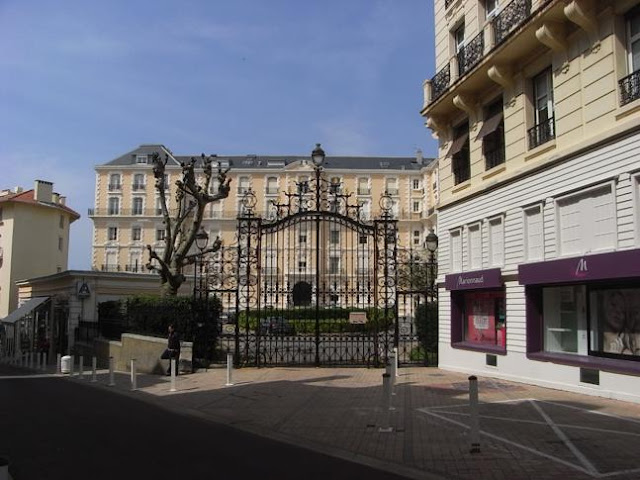 After lunch we went for a wonder round the town, more grand buildings, fabulous shops, Biarritz has all the usual suspects; Hermes, Dior, Prada etc. as well as interesting, individual privately owned boutiques.  The Basque country is famous for it's great quality linen and towels and there are plenty of reasonably priced shops in Biarritz selling amazing table linen and the softest, fluffiest best quality towels and robes imaginable. 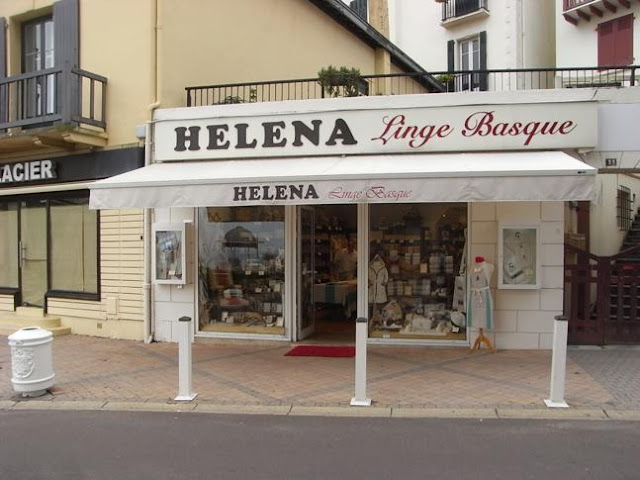 We drove home late Saturday afternoon, it was a wonderful trip, we will be returning soon...
Click here to read about other destinations on The Cote Basque