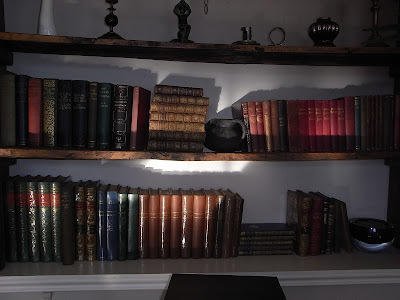 It's that time of year when I feel the need to spruce everything up and have a good old cleaning session, I always find it cathartic, it's easy to start taking things for granted but as I go round armed with a feather duster, I smile at some of the objects we have acquired and some of the memories they bring... 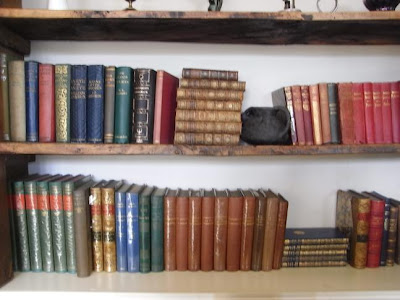 It's no secret that I love books, especially antique books, these books are all passed down from family members, they are all late nineteenth and early twentieth century.  They just don't make books like this any more, not only are they decorative but also a very good read.  We have Rudyard Kipling, Dickens and Shakespeare amongst others, they always remind me of my Grandmother who had an extensive library filled with books like these along with all my Mother's and her Brother's childhood books.  'Bored' was not a word my Grandmother liked to hear, if it was uttered, we were dispatched to the library with instructions to find a book.  I spent hours as a child, pulling out books from the shelves and pouring over them, I was on my own voyage of discovery.  I am slowly recreating that library in my own home, but without a room dedicated to it, you will find books everywhere in this house. 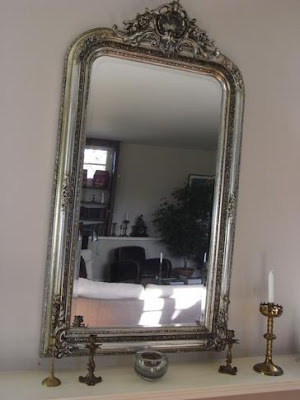 I love mirrors and this one is a beauty we had been wanting a French antique mirror like this for ages, MG found this beautiful mirror a few years ago on French ebay, it was under 200 Euros, I think the delivery cost more than the mirror but it was still a great bargain, really it should be over an elegant fire place but we live in an old farmhouse, so it resides in the upstairs salon, which is the most elegant room in the house but sadly no fireplace!  I always use this mirror to do my make up as the Salon has many windows and is flooded with light.  Maybe one day, if we move it will find a new home on an elegant mantel over the fireplace. 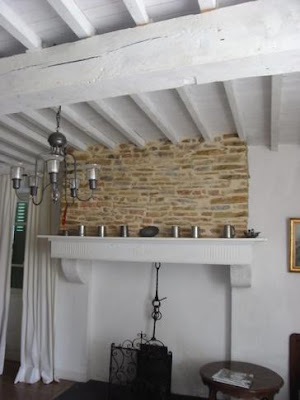 This is what the fireplaces look like in our home, this is one of the guest bedrooms, see, an elegant mirror does not really fit in here plus the fact you would need to be around seven feet to look in it!  However it's got it's own rustic charm, the chimney breast was originally plastered but we took it off to reveal the stone beneath, to add warmth and show the fabric of the house, this house and probably all the other early houses in the village were built from stone, stolen from the medieval château at the top of the lane, this was the fate of many Châteaus especially during and just after the revolution. 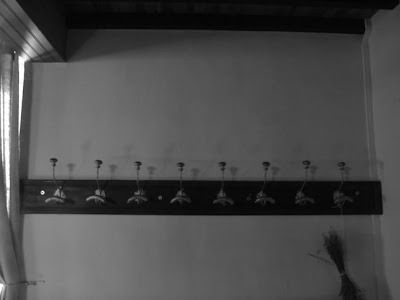 Sometimes when you buy an old house, people leave things behind which are of no value to them but a treasure to you.  We found this wonderful hat and coat rack in the garage, all dusty and languishing under a pile of junk.  A brisk going over with a wire brush was all it required.  These were common in village schoolrooms, I would love to think that it came from the local village school which closed down in the seventies...it re opened recently, I hope they don't want it back! 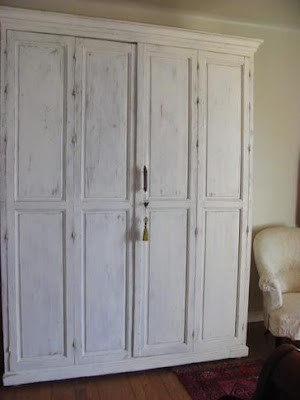 This wardrobe was also left in the garage, it was a dirty beige colour, filthy inside and out and was full of shelves, holding ancient old tools, pots of paint, tins of floor polish and all manner of interesting odds and ends, it must be very old, the nails and hinges are at least nineteenth century, it's huge, rustic and crudely made but despite this it's actually a very elegant piece.  I would like to think that the original owner\builder of this house made this wardrobe.  We painted it with white primer and then rubbed parts of it down with sandpaper to distress it, refurbished the interior with a hanging rail and replaced some of the old shelves, et voila!  It's now home to all my clothes, it took three men to get it from the garage to the upstairs. 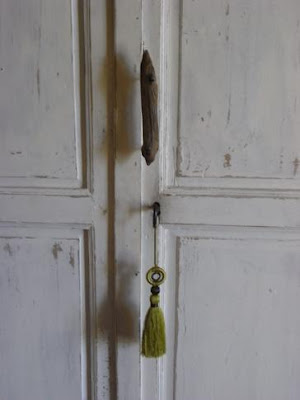 Look at the rustic wooden handle attached with very old nails, if this wardrobe could talk I wonder what stories it would tell us. 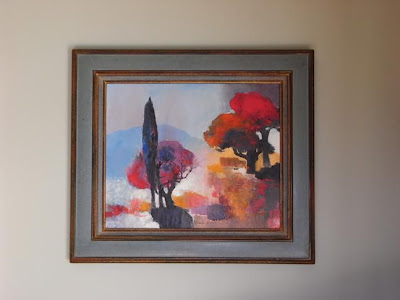 And finally my favourite painting,  a landscape of Tuscany, painted in oil, MG bought this when we lived in Paris.  After a long, lazy, romantic Sunday lunch at one of our favourite haunts in Paris; Le Brasserie de l'Isle Saint-Louis, strolling round later, we saw this painting  hanging in one of the galleries, we fell in love with it but it was very expensive, so we decided against it, later that week, it suddenly appeared in our apartment, MG had gone back to purchase it as a surprise. 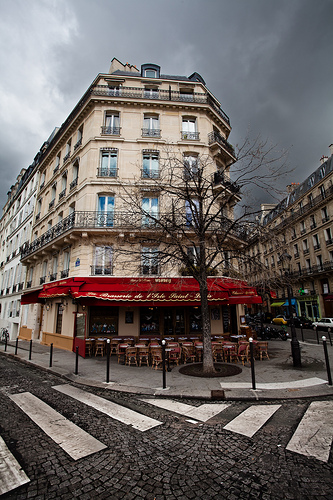