For The Gentleman Who Has Everything 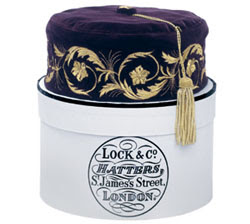 
MG's birthday is coming up soon and I am thinking of what to buy him for a birthday gift, he is quite difficult to buy for as normally he tends to order gadgets and things he wants from the internet, ideally he would want a sporty number, with an engine and four wheels but my finances wont stretch that far.  The other thing he loves is hats, MG cannot walk past a hat shop without going in, he has a hat for almost all occasions, yet he does not possess a classic Victorian smoking cap... 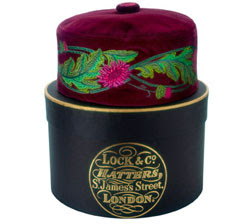 From Lock & Co
I have been looking around on the internet and have come up with these one's so far, I think MG would probably prefer a new one, I am rather liking the first one from Lock and Co, I think a tassel is quite important! Although they are quite expensive, alternatively I could make him one but God knows what it would turn out like as my sewing and embroidery skills are practically nil. 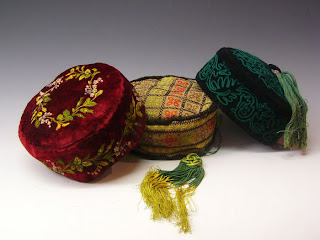 
Gentlemen's smoking caps first became popular in Britain in the 1850's, during the Crimean war they were worn mainly by the officers to keep the smell of smoke from their hair as they smoked Turkish cigars and cigarettes and drank Brandy in the officers mess.  Influenced by the East and the exotic the soldiers brought them back to Britain probably as souvenirs.  The smoking caps are a cross between a pill box hat and a Turkish fez usually decorated with Turkish and Russian silks and braids.  Wives and Fiancées left at home would often embroider and embellish the caps in their leisure hours, ready for their loved one's on their return. 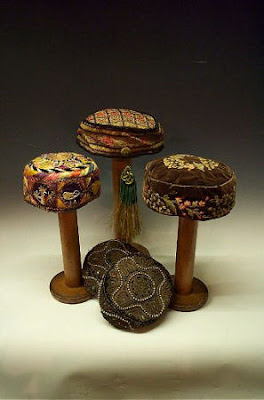 More From Bentleys
Back home in Britain after the Crimean war, the Victorian Gentry changed their dress several times a day to suit the occasion, Gentlemen would retire to the library or smoking room, after dinner, to smoke cigars, imbibe Brandy and discuss the business affairs of the day and would change into their exotic smoking caps, worn with a smoking jacket, that resembled a luxurious dressing gown, usually made from Persian silks, velvet, paisley and with quilted lapels.  They most likely adopted this habit to keep warm in draughty rooms and to keep the smoke from their evening clothes. 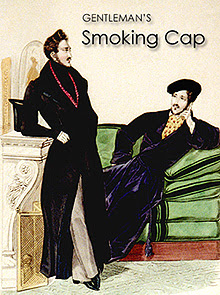 This new fashion for smoking clothing and lounging wear soon spread and was adopted in Gentlemen's clubs and became fashionable amongst the artistic and bohemian communities who were influenced by Oriental exoticism. 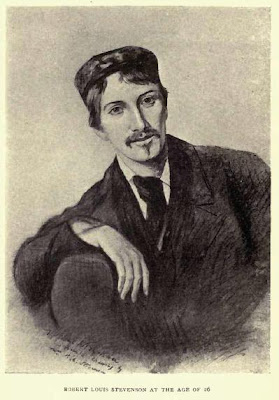 Today we mainly see smoking caps in costume dramas, usually worn by eccentric older Gentlemen. I think they are fabulous and I would love to see them make a come back, I am definitely going to get MG one, he looks great in hats and if he does not like it, I will wear it myself, it would look great worn at a jaunty angle teamed with a dinner suit. 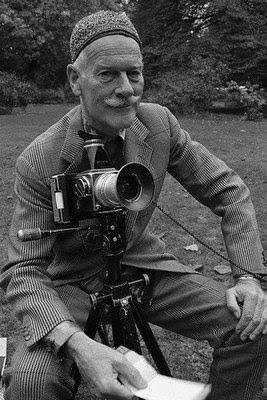