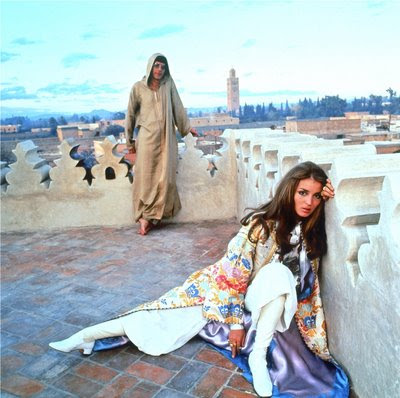 I was going to write an article about  it, but whilst doing my research I found this article, written by Justine Picardie, From The Telegraph, 13th July 2008, I cannot possibly improve on it, so here it is:

She was muse to Yves Saint Laurent, queen of 1960s Marrakech and the woman Rudolf Nureyev wanted to marry. But adoration and immense wealth weren't enough for Talitha Getty, fashion icon and addict. By Justine Picardie

It's the picture that has inspired a thousand fashion collections: Patrick Lichfield's photograph of Talitha Getty on a Marrakech rooftop with her husband, John Paul Getty, at the beginning of 1969, when the couple were the embodiment of a certain kind of 1960s glamour, a hippie-de-luxe look that has flourished ever since.
As such, it's represented an oddly persistent afterlife for Talitha Getty, who died of a heroin overdose in Rome on 14 July 1971 (or possibly 11 July, for the precise details of her death, like much of her life, remain shrouded in mystery). She was just 30, and left behind her a three-year-old son, the whimsically named Tara Gabriel Gramophone Galaxy Getty, and a reclusive husband who grieved in seclusion for a decade afterwards.


The couple, both of them struggling with drug problems, had been living separately in the months leading up to her death - she was installed with Tara in a grand Chelsea townhouse on Cheyne Walk - but Talitha returned to Getty's palazzo in Rome for an attempted reconciliation. They spent the night together, and the following morning her husband awoke, but Talitha did not. She was rushed by ambulance to a clinic, where she died without regaining consciousness.

Her past was as exotic as her looks, with a dark streak threaded through it from the start. Born in Indonesia to Dutch parents on 18 October 1940, Talitha was interned along with her mother in a Japanese prison camp during the Second World War. Her father, a painter named Willem Pol, was imprisoned in a different camp, and after their release the couple separated.

Talitha moved to England with her mother, who died in 1948, and was subsequently brought up by her father and his second wife, Poppet John, the daughter of the painter Augustus John. The interior designer Nicky Haslam first encountered Talitha in the 1950s, living with her father and stepmother in the South of France. 'She was the most beautiful child,' he says, 'and she grew into a gorgeous, long-limbed beauty in the 1960s. Everyone fell in love with her.'

Her admirers included the former Conservative minister Lord Lambton (Woodrow Wyatt recalled in his diaries that Lambton 'sent her huge bunches of flowers about every two hours and showered her with presents') and Rudolf Nureyev.

In her biography of Nureyev, Julie Kavanagh describes how the dancer was 'captivated' by Talitha from the moment they first met at a party in 1965: 'Talitha had alabaster-white skin and high cheekbones and eyes much like his own. Although he did not find her particularly intelligent, she was intuitive and sympathetic, and they instantly seemed to recognise something in each other… what he was actually seeing was an exquisite, androgynous reflection of himself… Nureyev had never felt so erotically stirred by a woman, telling several friends that he wanted to marry Talitha. She was just as enthralled by him.'

As it turned out, when Nureyev's neighbour in Belgravia, Claus von Bulow, invited them both to dinner Nureyev was unable to come, but another of the guests that night was instantly smitten: John Paul Getty Junior, the son of the richest man in the world, and heir to an oil fortune. She was to become his second wife (he had already separated from his first, with whom he had four children), after a wedding ceremony in 1966 at Rome City Hall to which Talitha wore a white mink-trimmed minidress.
The couple travelled to Marrakech for their honeymoon, where they bought the beautiful 19th-century Le Palais du Zahir, thereafter known as the Pleasure Palace. It was here that Lichfield's photograph (now held by the National Portrait Gallery) was taken - John Paul hooded and brooding in a djellaba, Talitha the epitome of rich bohemianism in her ornate silk kaftan over white harem pants - and it was here, too, that Yves Saint Laurent was swept into their orbit.

'When I knew Talitha Getty,' he later recalled, 'my vision completely changed.' He was entranced by her mixture of apparent innocence - the barefoot flower child in ethnic dress - and wild decadence (the drugs, the jewels, the Rolling Stones and Beatles as house guests). 'I knew the youthfulness of the Sixties,' said Saint Laurent, in 1984, almost two decades afterwards, 'Talitha and Paul Getty lying on a starlit terrace in Marrakech, beautiful and damned, and a whole generation assembled as if for eternity where the curtain of the past seemed to lift before an extraordinary future…'

A slightly less romantic view could be glimpsed in the diaries of the writer John Hopkins, whose entry for 1 January 1968 reads: 'Last night Paul and Talitha Getty threw a New Year's Eve party at their palace in the medina. Paul McCartney and John Lennon were there, flat on their backs. They couldn't get off the floor let alone talk. I've never seen so many people out of control.'

Out of these anecdotes, spliced with the brief facts of Talitha's life, has arisen a myth that grows more potent with the passing of the years. There is little concrete evidence to remember her by - a handful of photographs, and a bit part in Barbarella - but out of this absence a layered romance has been conjured by a multitude of fashion designers, who cite her as an icon.

First and foremost was Yves Saint Laurent, who had the benefit of actually knowing Talitha, unlike his successors, and whose designs were infused with a romanticised vision of her as a night star of Marrakech. 'Yves had never seen anyone like Talitha before,' wrote his biographer, Alicia Drake, describing their initial encounters when Saint Laurent first went on holiday to Marrakech in 1967. 'He took in every visual detail. He was struck by the wildness and high sexuality of it all, at that time so alien to Paris couture. It wasn't just the clothes that affected Yves; the Gettys lived with a degree of indulgence and hedonism that he had never witnessed before.'

It was under Talitha's influence that he and his partner, Pierre Bergé, bought a house within the walled medina of Marrakech; and her legacy is still apparent in the current summer exhibition at the YSL Fondation in Paris, 'Une Passion Marocaine', a collection of gorgeously decorative kaftans and north African jewellery of the kind that Talitha wore at her parties in the Pleasure Palace.

Since then everyone from Dolce & Gabbana to Dries van Noten has done a take on Talitha, and her style is still reflected in this summer's version of bohemian chic. 'She's a little bit like Jackie O, in that she's an obvious reference to use,' admitted Phoebe Philo in an interview with W magazine at the end of 2001, having been inspired by Talitha for her Chloé collection. 'I guess you could say I got carried away with Talitha's character. Not that all of what I imagined about her was even true. I used her more as a fantasy to dream about.'

There are those who might see Talitha's ending as more nightmarish than alluringly dreamy - the grotesque descent into drug addiction, the Christmas party she gave in a pigsty in Rome - but, as with Jimi Hendrix or Edie Sedgwick, the mythologising is more often than not untouched by the facts.
And of course, like those other dead icons, she never lived long enough for her beauty to be dimmed, nor to witness the tragedies that overtook the Getty family (her husband's son by his first marriage was kidnapped in Italy in 1973, and his ear cut off before the ransom was paid, while his daughter, Aileen Getty, contracted Aids). If Talitha Getty had survived she would be 68 this year, her lovely face wrinkled, if not ravaged by the excesses of her past.

But instead, she remains forever young, almond-eyed and enticing, on that Marrakech rooftop, with the world at her feet and the Atlas mountains behind her, as if the 1960s hadn't ended, and the sky had never gone cold.