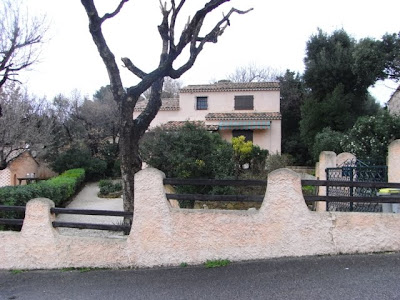 This was the last photo of Belle Merès house taken just before we set off for home, early yesterday morning.  31 years of life, love, laughter and tears have been witnessed by this house. There will be new occupants moving in soon and the house will once again bear witness to another family playing out their lives between it's walls. Although we were all a bit sad, we must look to the future, Belle Mère is looking forward to her new life in her new home and is already making exciting new plans for the new house.
We trundled off, leaving Belle Mère to finish cleaning the property, ready for the new owners, we thought we would make good time as we set off early and then 7 hours later and just 17 KMs from home, this happened. 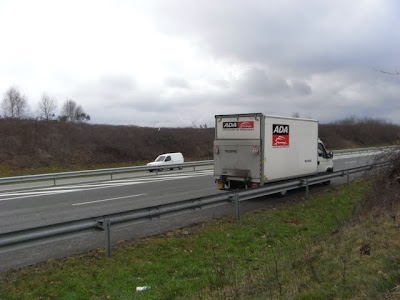 Yes, here we are on the hard shoulder of the A64, auto route, broken down, at a very dangerous spot. Not what you need after a seven hour drive when you are exhausted, with a van full of furniture and friends coming to help you unload at a certain time, at the other end. We called the hire company, who told us they were not allowed to recover us on the autoroute but would reimburse the costs of the offical motorway dépannage (Break down truck) they told us to ring 17, the police. 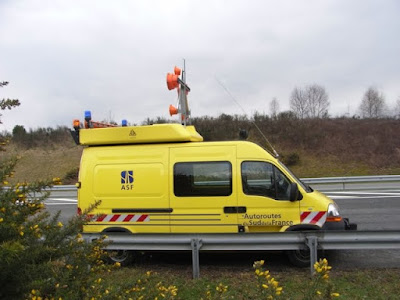 Half an hour later we were still waiting, on the verge behind the armco barrier, in the freezing cold, then a yellow man in a yellow van turned up, by chance he had seen us and stopped to see if he could be of assistance.  He rang through and told us nothing had been reported and so he sorted out the dépannage, so we waited some more, he waited with us and was very nice and helpful even letting MG open the van to get a fleece out, did I mention it was freezing. 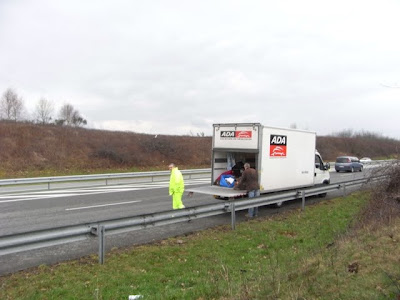 And we waited......Crusoe was shivering and really pissed off, he was not the only one, here he is looking at me, thinking, what the dickens is going on! 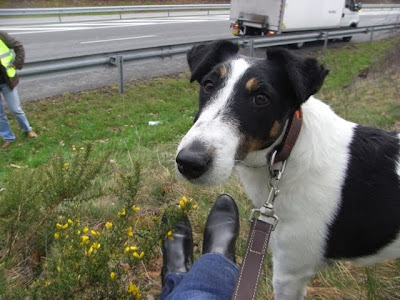 Eventually, The Dépannage man arrived with his shiny, new Mercedes truck, of which he was extremely proud, he was a bit worried about Crusoe's hairs getting on the interior of the cab. Within minutes, the van was winched on and the rescue was complete. Turned out the petrol gauge was faulty, we had run out of diesel, you will be pleased to know the rescue costs were covered by the hire company. 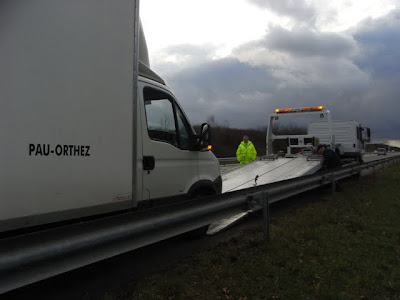 We were given some diesel and got home much later than expected, our friends turned up at 8am this morning to help unload the van.  All is well. tomorrow I am having a much needed lie in, then I will have to turn round the washing and do some jobs as we are off to England on Tuesday for another adventure........

A big thank you for all your wonderful comments, whilst at Belle Mères, sorry I could not respond, but laptop access, was severely restricted!