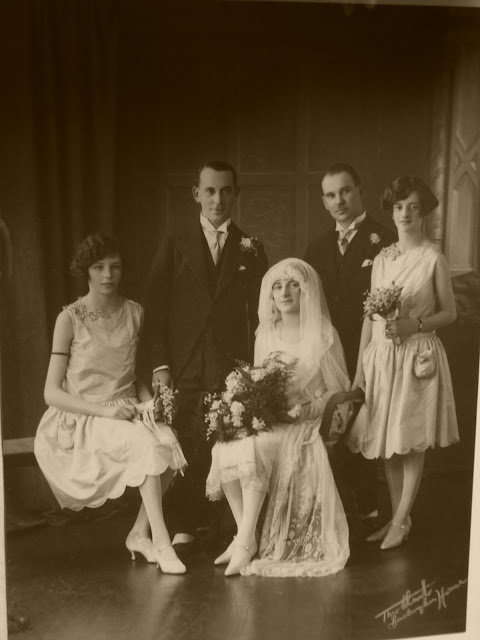 This is my favourite photograph, a portrait of my maternal grandparent's wedding, in the roaring twenties, (please excuse the slightly wonky photograph, but I snapped it, in it's frame, which is currently hanging on my Mothers staircase wall).

I do occasional posts about forgotten figures of the twentieth century, and although my Grandmother is certainly not forgotten, I feel she was great enough to include.  Sadly I never knew my Grandfather as he died before I was born.

My Grandmother was an amazing woman born, in 1900, it's incredible to think she lived through two world wars, six British Monarchs, countless Prime Ministers and witnessed all the changes of the fast moving twentieth century.  She was born into an artistic, forward thinking family, the eldest of four.  She showed early academic promise and a gift for languages.

She was one of the first women to attend Leeds University and graduated with honours in languages, she spoke fluent French and German, with no accent. She followed university by attending The Sorbonne in Paris to further her French studies. I wish she was still alive, Paris was so vibrant in the 1920's, I would love to ask her about it. She did tell me, she had a wonderful time.  She then returned to England and became a professor of French.

Soon after, she met my Grandfather, she married him, had children and gave up her career, to bring up her family and help run my Grandfathers business.

Together with my siblings I spent a lot of time with my Grandmother as a child and young adult, I think she had a lot to do with shaping the person I am today.  She was a lovely Grandmother, full of warmth and wisdom and a wonderful cook, I used to love going into the pantry on baking day, to pinch freshly baked cakes and buns from the cooling trays.

In later life she was a philanthropist, involved in a lot of charities and good causes.  She passed away in 1985, every day she is with me in my thoughts and she often visits me in my dreams.  I do miss her.